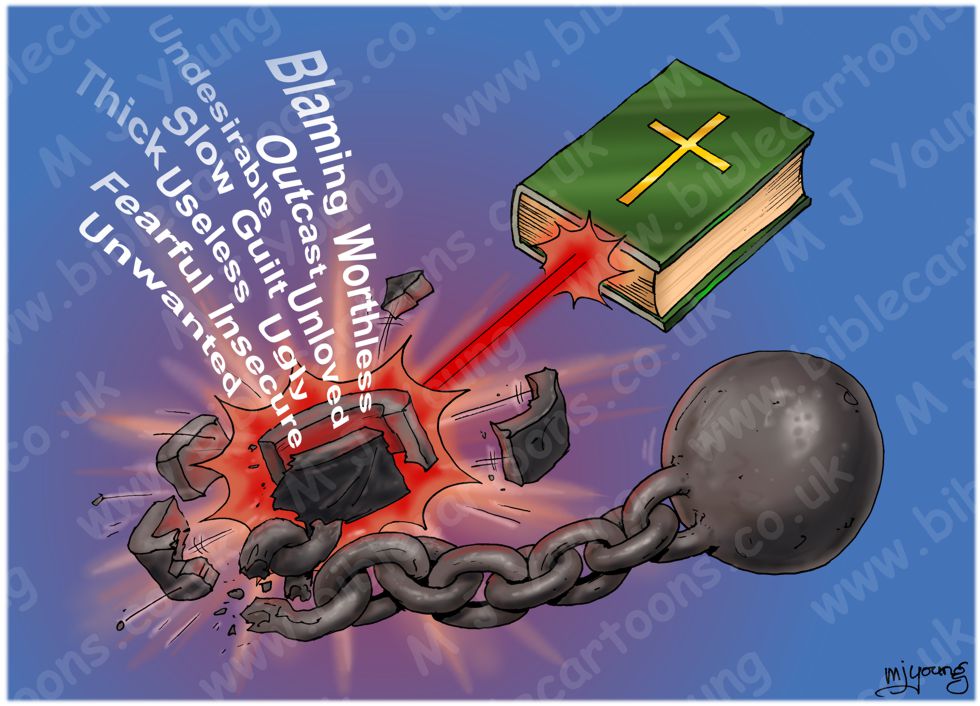 
We went to church last Sunday [07/December/2014] & the pastor’s wife gave a short talk describing a scene which really struck me… so much so that I sketched it on my notepad immediately! Today I have converted that into a full colour design (see above).

Words, especially negative words spoken over us when we are children, can have long-term & devastating impact on us in life.
She said that we often have a word spoken over us which is very unhelpful, often directed at us when we are children (and adults sometimes!) For example, a parent might say to a child “You’re useless” or “You’re a pain” & if that child hears the word spoken over them (ie about them) many times, then they may subconsciously begin to believe that it is true about them, & then they may align their behaviour with that word. The word spoken in hast, or unthinkingly can have a devastating & long-term negative impact on the person in question; it tends to “pulls us down” & mould our character until we reflect that unkind word. This naming & shaming by a dominant parent-like figure may happen to some degree to a lot of us (especially when we are vulnerable children) & you would think that such words would have no impact. However, if we hear that word often enough, particularly from some one we trust (like a parent, guardian, teacher, friend, etc), then we start to believe it, & that is the beginning of the problem. We can “carry” that word-label with us for all of our adult life, resulting in a negative self-image which affects our confidence & erodes our self-worth.

Our choice.
The pastor’s wife went on to say that we have a choice, we can either continue to believe the unhelpful, destructive word spoken over us/about us, or else we can believe what God has said about us, which is to be found in the Bible. She explained that the Bible is like a powerful laser beam, which can cut through steel. In the same way, the Bible can cut through the negative words about ourselves, which we may have believed for years, & start to believe what God says (via the Bible) about us instead.

There are many Bible quotes that leave is in no doubt that God loves us deeply, but it is up to us to make that choice: either believe what some unthinking, unkind person has said, or else believe what our heavenly Father says about us. The choice is ours to make.

My illustration shows a metal ball & chain, which the pastor’s wife mentioned in her word picture. She said the negative word spoken over us is just like that ball & chain, in that it keeps us shackled to the mistaken belief that we must be like that unkind word. The Bible tells us the truth, & cuts us free from the ball & chain, as I have shown in my illustration.