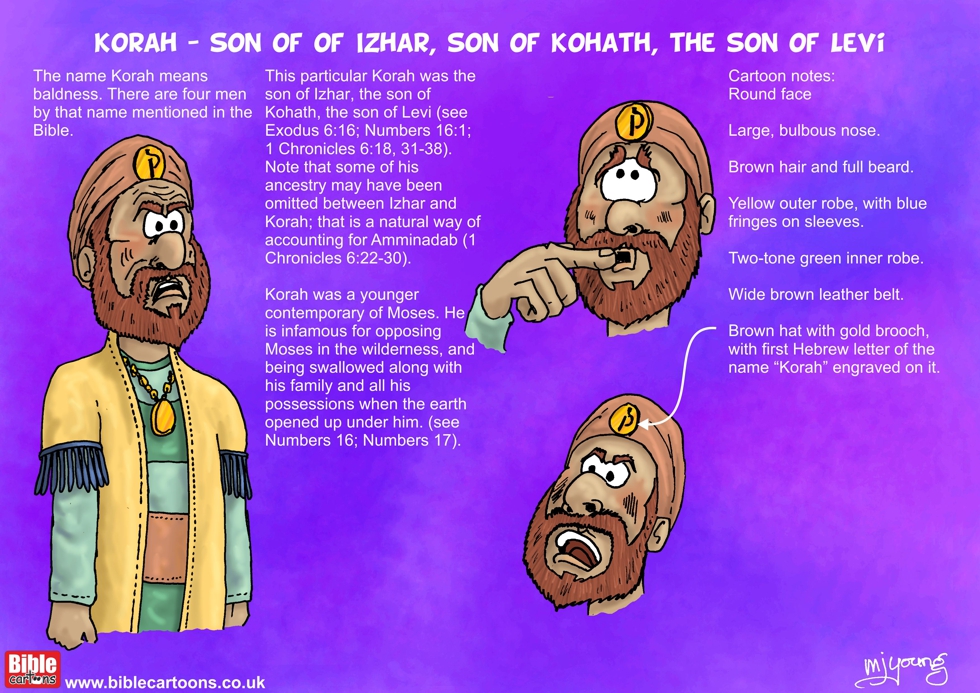 This is my character sheet, or design specification, for Korah – son of Izhar, who was the key figure and leader of a rebellion against the leadership of Moses and Aaron after the Exodus and during the wilderness years.

The purpose of this sheet is to keep a record of the attributes or characteristics of my drawing, so that I can draw a similar-looking cartoon in all future scenes showing Korah. I have included a brief personal history on the sheet as well.

This Korah is best known as the man who was swallowed up when the earth opened up beneath him. He was swallowed up along with his family, possessions and associates when they challenged the authority of Moses and Aaron in the wilderness, after the Exodus from Egypt (see Numbers 16-17).

Although Korah is named as the principal rebel in this account, Dathan and Abiram of the tribe of Reuben are not much less prominent than Korah. In Numbers chp 16 and 26 these brothers are mentioned with Korah, although they are mentioned in Deuteronomy 11:6 and Psalm 106:17, where Korah is not.

On the son of Peleth (another Reubenite) was also involved in the conspiracy against Moses. The account tells us that there were other Levites in the rebellion besides Korah (Numbers 16:7-10), and it particularly mentions 250 “men of renown,” or princes. These leaders would have be summoned if there were a public assembly (see Numbers 16:2, 17, 35).