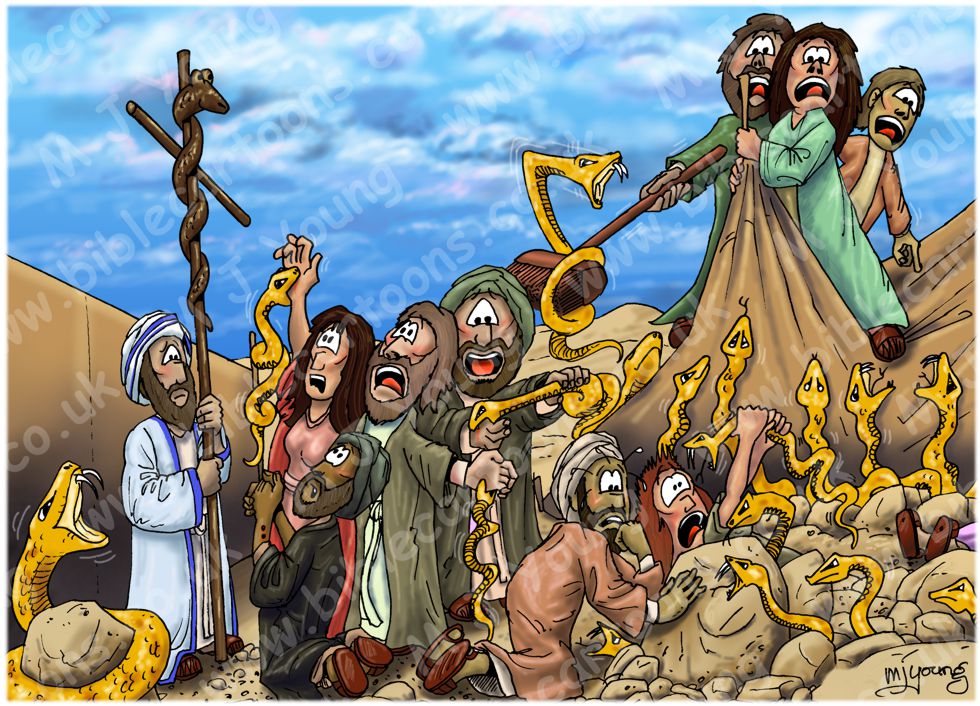 CHARACTERS PRESENT:
Moses (holding up the bronze snake) next to the Tabernacle on the left of the picture. Various Hebrew people milling around with a lot of snakes too! Notice the family who have climbed up on their tent, on the right of the picture, to try to get away from the snakes!

RESEARCH/ADDITIONAL NOTES:
There are two versions of this scene:
01) (This page) Numbers 21 – Bronze snake – Scene 04 – Snake on a pole (Version 01). This is the earlier version of this scene, showing the Israelite camp, the tabernacle in the background, Moses, and the rest of the scene.

02) (Next page) Numbers 21 – Bronze snake – Scene 04 – Snake on a pole (Version 02). In this later version I have focused solely on the people and removed the tabernacle background.

This story occurred during part of the Exodus, when the Hebrew people left Egypt & headed into the desert wilderness. At this point in their story, the Hebrew people had just lost Aaron the priest (Moses brother) who had died on top of Mount Hor, in the previous chapter (Numbers 20.) Mount Hor can be seen on the horizon, 10.1 miles (16.3 Km) away. It is the hill-like peak in the centre of the picture, behind the man with the broom on top of his tent!

Some commentators have tried to identify the species of snake that the Lord sent against the Hebrew people. There are called “Fiery serpents” in the King James Bible, venomous or poisonous snakes in the New International, New Living and The Message versions of the Bible. Interestingly, the Hebrew word used in the Bible – saraph, can be translated as “fiery serpent”, but the same word is also translated into the seraph or angelic being, having 6 wings.

Different reasons are given as to why these snakes were “fiery.” One reason could have been their colour, and another is the effect of their strong venomous bite, which caused the victims to experience internal “fire” and die. Vipers in the deserts of the world are known to cause such reactions. Vipera berus (Common names: common European adder, common European viper,) produces a bite which results in a violent inflammation through the whole body, and a fiery appearance of the skin. Another candidate for the fiery serpents might be Naja haje (The Egyptian cobra) which is a venomous snake found in Africa and the Arabian Peninsula. It is the 4th most venomous cobra species. It is not possible to identify the exact species of snake the Lord used; they may even have been a mysterious, un-earthly species that we don’t know about!

The final verse in the above scripture is amazing, ‘Whenever those who were bitten looked at the bronze snake, they recovered!’ How can it be that merely looking at a bronze replica of a snake can save you from a venemous snakebite? There is a correlation between looking at the bronze snake on it’s pole, & looking towards Jesus Christ as your Lord & Saviour. This is wonderfully expressed in J. Vernon McGee’s commentary “Thru the Bible” which I am unashamedly quoting here:
‘There is a marvellous lesson here, you see. They are to look at the brazen serpent, and they are to look in faith. In fact, they would not look if it were not in faith. I can well imagine some of the folk saying that this was just nonsense. They would want something else, something more tangible than just turning around to look at a serpent of brass. But, of course, if a man would not turn to look at the serpent of brass, he would die.

How was the Son of man lifted up? You say, on a cross. Yes, but He was dying on the cross of Barabbas, and Barabbas was a thief and a murderer. Barabbas was guilty and was worthy of death. Jesus was not. Our Lord was made sin for us. On that cross, He not only has taken the place of Barabbas but also your place and my place. God permitted this and did this because He loves us. But God cannot save us by His love. It doesn’t say that God so loved the world that He saved the world. Not at all. God so loved the world that He gave His only begotten Son. Now what God asks you to do, my friend, is to look and live. Look to Christ! He is taking your place there. You are a sinner and it is you who deserves to die. Christ did not deserve to die. He died for you.

We read here that this serpent of brass was made, and those who looked to it lived. Those who did not look to it — died. It is just that simple today. Either you are looking to Christ as your Saviour because you are a sinner, or you are not doing it. If you are not doing it, I don’t care how many times you have been baptized, how many ceremonies you have been through, how many churches you have joined, or who your father and mother happened to be, you are a lost, hell-doomed sinner. You must look to the Lord Jesus Christ. It is just as simple as that. And by the way, it is just as complicated as that. What a problem people have today. They would rather look to themselves and to their own good works, trusting that somehow their own good works might save them. It is a problem for people to admit they are sinners and to look to Christ and trust Him.’

So you see, this scene is very evangelistic in nature, much more so than ever I thought! I drew & coloured this scene because it sounded interesting, & was exciting & engaging, in a very visual way. I simply thought that it would make a wonderful cartoon. Recently I have been thinking about drawing more obviously evangelistic cartoons, ones God can use to get the message of Salvation & the Good News across to all my viewers. To that end I had planned to draw cartoons about heaven & hell next. I had no idea that what I was currently drawing was also about that very same theme! So it seems I have already embarked on my new mission to draw evangelistic subjects, before I even realised it! How readily God takes our words, prayers & intentions to heart. A fact I am very happy about!


Bible Doctrine Notes
21:4-9 EVIL AND SUFFERING, Repentance (2.34A)
Suffering can act as a call to repentance. The Hebrew people made repeated complaints, which brought God’s judgement upon them. Repentance brought God’s relief from that judgement. Trust in God’s chosen symbol, lifted up over the people, brought healing for them. Since the 1st century AD, trust in Jesus the Christ brings salvation. (See John 3:14-15).

21:8-9 JESUS CHRIST, Foretold (1.21A)
This remarkable experience of Israel is used as a prefiguring of the cross of Jesus and its saving power.