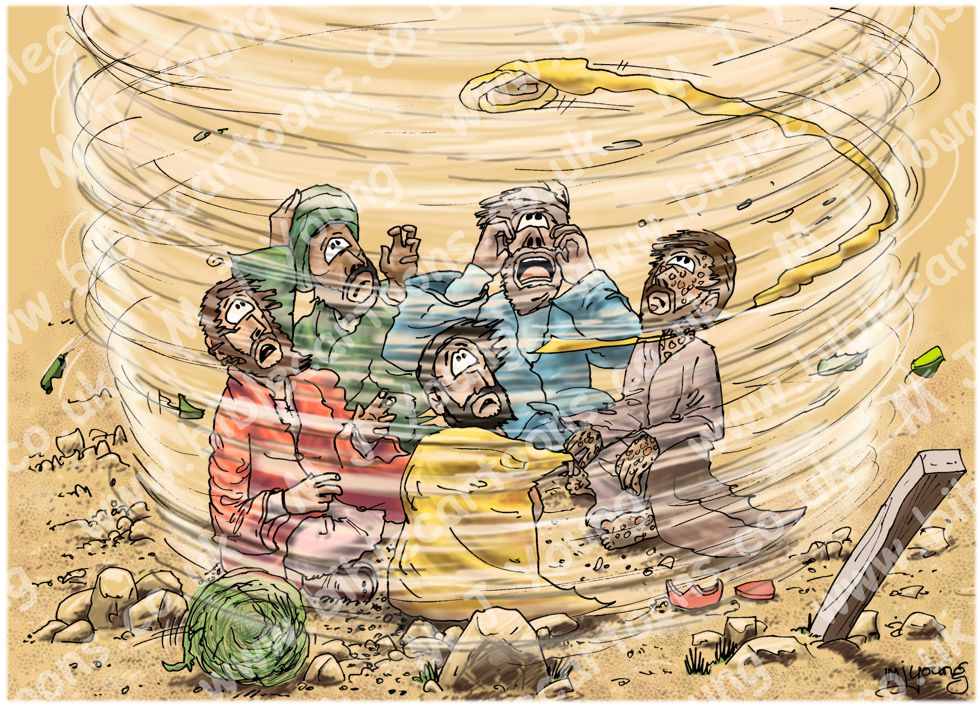 Job 38:1 (NLT)
Then the LORD answered Job from the whirlwind:

CHARACTERS PRESENT:
Job, the main character of the story sits cross-legged on the right of the picture. Notice that Job has red sores all over his body. Job 2:7-8 states, ‘So Satan left the LORD’s presence, and he struck Job with a terrible case of boils from head to foot. Then Job scraped his skin with a piece of broken pottery as he sat among the ashes.’ The pottery can be seen on the ground next to Job.

Job has 3 friends (called comforters in some bible translations): Eliphaz, Bildad & Zophar. A forth, younger man is also introduced towards the end of the story, named Elihu son of Barakel the Buzite, of the clan of Ram. These four friends can bee seen in this cartoon sitting to the left of Job in green, blue, red & yellow robes.

RESEARCH/ADDITIONAL NOTES:
I enjoyed drawing this cartoon, especially the fearful & awe-struck expressions of the people, having their robes blown all over the place by the whirlwind. My favourite bit is the yellow turban which has been blown off, & is unravelling in the vortex of wind! Notice the leaves & the tumbleweed being blown around as well.

There is a plant that forms tumbleweed balls & is blown about in Israel, called Gundelia tournefortii L. It’s common names are: Galgal, Tumbleweed, Tumble Thistle.

The book of Job is regarded by many bible scholars as the oldest book of the Bible, although some disagree with this assessment.

The story of Job begins with a sort of wager between God & Satan (see chapters 1-2). The majority of the story
(chapters 3-37) portrays the discussions between Job & his friends. Then the Lord God speaks to Job (Chapters 38-41) & in chapter 42 we hear Job’s reply & read the culmination of the story: The Lord God blesses Job.

The book of Job centres on the question of why the righteous (”good people”) suffer & how that relates to the Lord God, who is loving & holy. Job loses his family, his possessions, wealth & finally his health & then sits among the ashes – a Hebrew action demonstrating anguish & sorrow. Job’s three friends suggest that his suffering is a product of his own sin, which was another popular explanation amongst the Hebrews, even in the lifetime of Jesus Christ. Elihu (a younger man) then suggests that sufferings are very often the process by which our Holy God refines us, and by no means are we to conclude that these are the actions of a vindictive or implacable God. Finally, God speaks himself to Job, out of a whirlwind, which is the scene shown in this cartoon.

A different assessment of the central theme of the Book of Job has been postulated by Philip Yancey, in his book “Disappointment with God.” He believes that the story is primarily about faith. To quote from his book (Page183) ‘When people experience pain, questions spill out…Why me? What’s going on? Does God care? Is there a God?… What we long for, the prologue to Job provides: a glimpse into how the world is run. As nowhere else in the Bible, the Book of Job shows us God’s point of view, including the supernatural activity normally hidden.
Job has put God on trial, accusing him of unfair acts against an innocent party. Angry, satirical, betrayed, Job wanders as close to blasphemy as he can get – just to the edge. His words have a startlingly familiar ring because they are so modern. He gives voice to our most deeply felt complaints against God. But chapters 1 & 2 prove hat, regardless of what Job thinks, God is not on trial in this book, Job is on trial. The point of the book is not suffering: Where is God when it hurts? The prologue dealt with that issue. The point is faith: Where is Job when it hurts? How is he responding? To understand the Book of Job, I must begin here.’
I recommend this book to you, if you are struggling with the enormous issues & questions of human suffering & God’s activity, or apparent inactivity.

Eliphaz the Temanite…
The southern portion of Edom was the country of the Temanites, who were celebrated for their courage and wisdom (Jeremiah 49:7.) Is it coincidence that someone from a country renown for their wisdom is seen counselling Job? At the end of the story, we conclude that the “wisdom” of the 3 friends of Job is incorrect. Perhaps Eliphaz & his companions were “allowed” to debate with Job, to show that Man’s wisdom is not the same as God’s wisdom, which is infinitely higher & better… just a thought!

Bildad the Shuhite…
The term Shuhite is only read in the book of Job & quite probably comes from Shuah, son of Abraham of Keturah (Genesis 25:2; 1 Chron. 1:32). His descendants formed an Arab tribe, the Shuhites who resided near the land of Uz (Job 2:11).

Zophar the Naamathite…
The term Naamathite is again only read in the book of Job. There are several towns from which the name might have been derived, but its true derivation is unknown.

Elihu son of Barakel the Buzite, of the clan of Ram.
The term Buzite is again only read in the book of Job & indicating ancestry from the Arabian tribe of Buz.