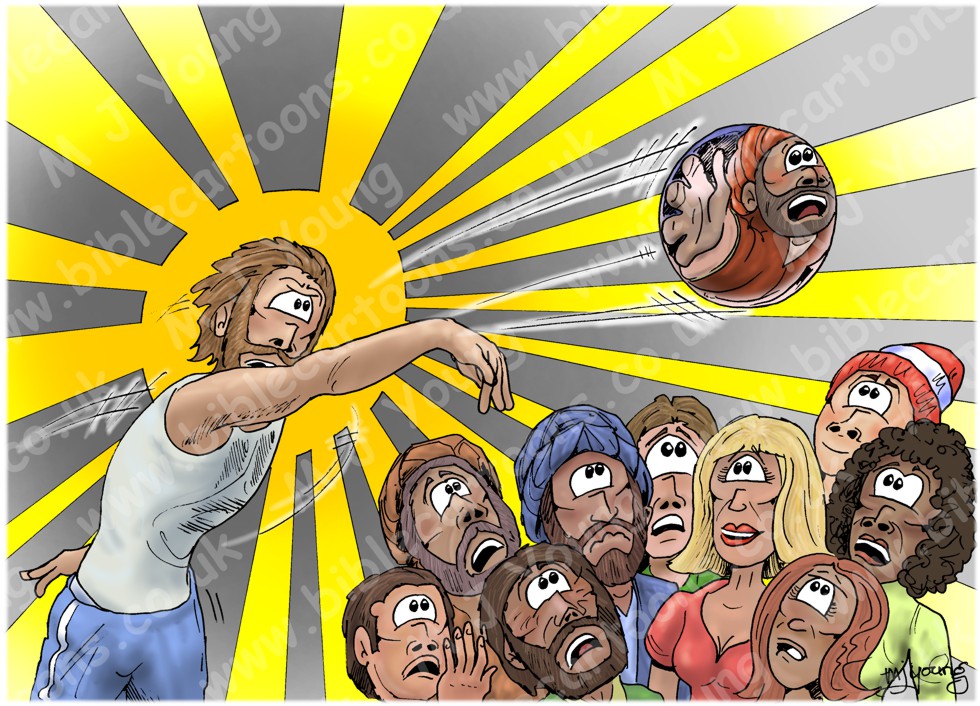 Isaiah 22:17-19 (ANIV)
17 “Beware, the Lord is about to take firm hold of you
and hurl you away, O you mighty man. [Shebna, the treasurer or governor of the King’s palace]
18 He will roll you up tightly like a ball
and throw you into a large country.
There you will die
and there your splendid chariots will remain—
you disgrace to your master’s house!
19 I will depose you from your office,
and you will be ousted from your position.

CHARACTERS PRESENT:
Shebna as shot being thrown away. Shot putter and crowd watching.

RESEARCH/ADDITIONAL NOTES:
This picture was originally drawn in 2012 in relation to the London Olympic Games. I looked throughout the Bible for sporting events or references & came across this one, which sounds just like the shot put event… “He will roll you up tightly like a ball and throw you” (Verse 18)! That inspired me to draw Shebna as a shot (metal ball) being thrown. The crowd beneath him are a mixture of people in ancient (Hebrew) clothes & modern ones.

Chapter 22 in the book of Isaiah is entitled “A Prophecy about Jerusalem”, which outlines the distress & horror of the siege of the city by Sennacherib’s invasion of Israel. The prophecy explains that Shebna (the manager of the palace staff) would be deposed & exiled.

Who was Shebna?
[Meaning Tender youth] “treasurer” over the house in the reign of Hezekiah, i.e., comptroller or governor of the palace. On account of his pride he was ejected from his office, and Eliakim was promoted to it (Isa 22:15-25). He appears to have been the leader of the party who favoured an alliance with Egypt against Assyria. It is conjectured that “Shebna the scribe,” who was one of those whom the king sent to confer with the Assyrian ambassador (2Ki 18:18, 26, 37; 2Ki 19:2; Isa 36:3, 11, 22; Isa 37:2), was a different person.
[Source: Illustrated Bible Dictionary: And Treasury of Biblical History, Biography, Geography, Doctrine, and Literature.]

View all Bible Cartoons in Isaiah Go to Search by Bible Book page Do I need High or Medium qlty cartoons? FAQ’s