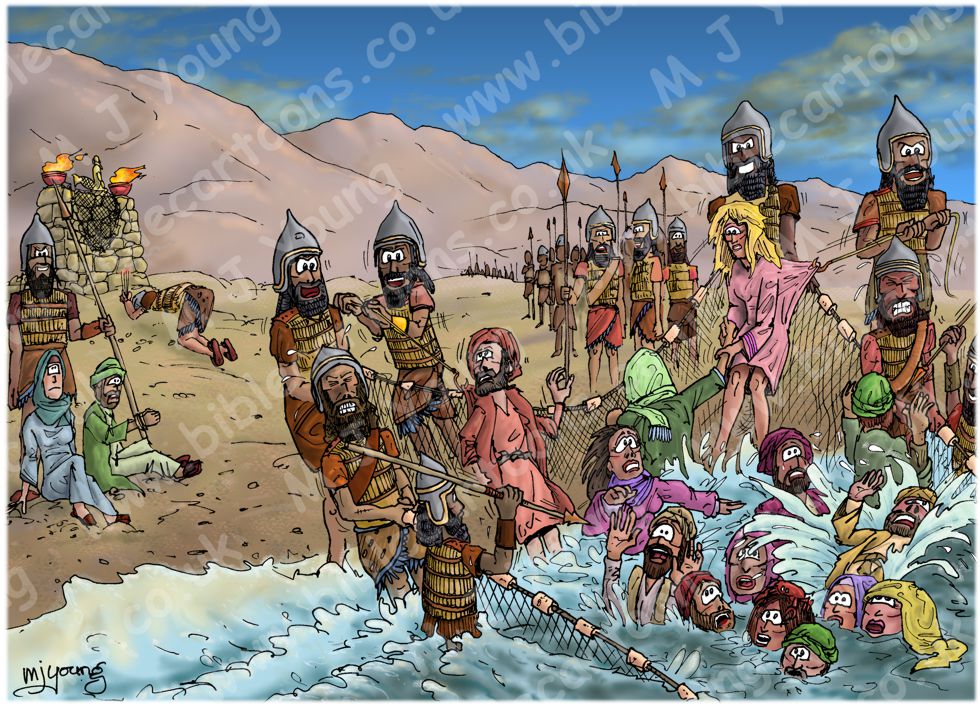 Habakkuk 1:12-17 (ANIV)
[Habakkuk’s second complaint]
12 O Lord, are you not from everlasting?
My God, my Holy One, we will not die.
O Lord, you have appointed them to execute judgment;
O Rock, you have ordained them to punish.
13 Your eyes are too pure to look on evil;
you cannot tolerate wrong.
Why then do you tolerate the treacherous?
Why are you silent while the wicked
swallow up those more righteous than themselves?
14 You have made men like fish in the sea,
like sea creatures that have no ruler.
15 The wicked foe pulls all of them up with hooks,
he catches them in his net,
he gathers them up in his drag-net;
and so he rejoices and is glad.
16 Therefore he sacrifices to his net
and burns incense to his drag-net,
for by his net he lives in luxury
and enjoys the choicest food.
17 Is he to keep on emptying his net,
destroying nations without mercy?

TIME OF DAY:
Not specified in Bible. I have set the scene in the late afternoon.

LIGHTING NOTES:
The sun is beginning to set behind & to the right of the viewer.

RESEARCH/ADDITIONAL NOTES:
This is my rather literal interpretation of Habakkuk chapter 01.

There are 2 “complaints” from the prophet Habakkuk recorded in the first chapter of his book: verses 2-4 & verses 12-17. My scene above depicts the second of these complaints.

The people in the sea are Hebrews, being caught in a fishing net by Babylonian soldiers. This is based on verse 14 “You have made men like fish in the sea”, & verse 15 “The wicked foe pulls all of them up with hooks, he catches them in his net, he gathers them up in his drag-net;” When I read that I thought of substituting fish for people, to make an interesting & thought-provoking scene.

Verse 16 continues “Therefore he [Babylonians] sacrifices to his net and burns incense to his drag-net,” when I read that I had the idea of including a Babylonian soldier bowing to a stone altar. The soldier in my scene has incense in his hands, the smoke from which you can see drifting above his bowed head.

On the altar is a figurine of Ea (whose Sumerian equivalent was Enki) was a mischievous “god” of wisdom, magic and incantations who resides in the ocean under the earth. There is also a net & two bowls of fire.

Who was Habakkuk?
Little is known of Habakkuk the prophet. Only three times is the writer designated as a “prophet” in the title of his book: in the books Habakkuk, Haggai, & Zechariah. For this reason Habakkuk, is the only pre-exilic prophet to be so designated.

In chapter 3 the style of the book is quite like psalms or other wisdom books of the Bible. There is also reference to musical terms (Selah, For the director of music. On my stringed instruments. (verse 19)) which might indicate that Habakkuk was a musician, or at least had some musical knowledge.

It is generally accepted that the reference to the Babylonians (Habakkuk 1:6) places the book somewhere within the seventh century BC. More accurate dating is more controversial. The dates for the penning of Habakkuk fall into three time periods: the reign of Manasseh (697-642 BC), the reign of Josiah (640-609 BC), & the reign of Jehoiakim (609-598 BC).

View all Bible Cartoons in Habakkuk Go to Search by Bible Book page Do I need High or Medium qlty cartoons? FAQ’s