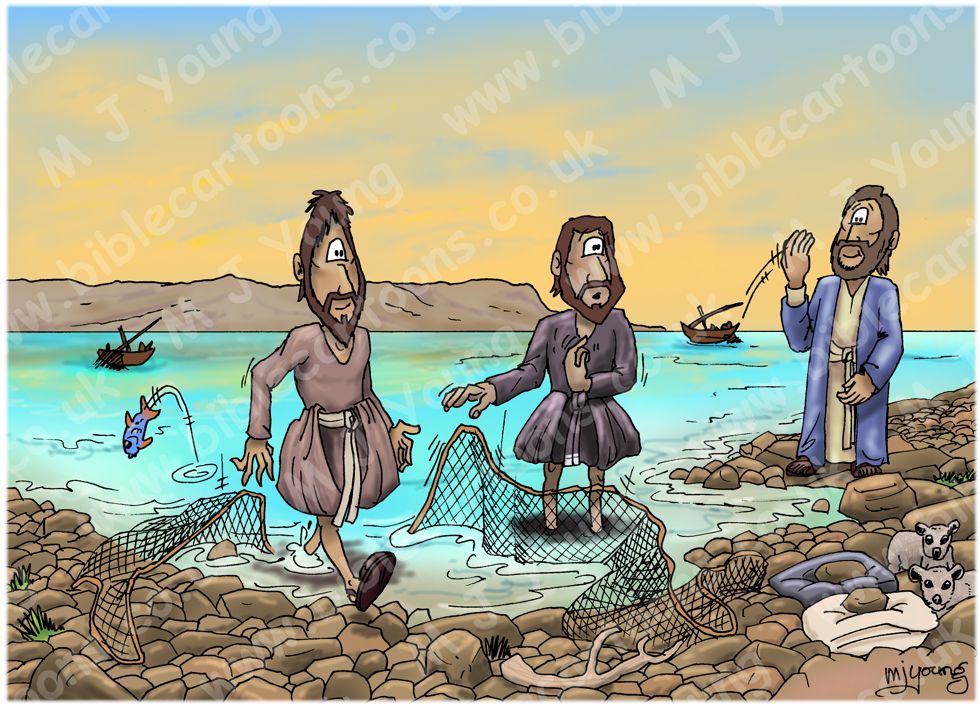 Matthew 4:18-20 (NLT)
18 One day as Jesus was walking along the shore beside the Sea of Galilee, he saw two brothers—Simon, also called Peter, and Andrew—fishing with a net, for they were commercial fishermen. 19 Jesus called out to them, “Come, be my disciples, and I will show you how to fish for people!” 20 And they left their nets at once and went with him.

TIME OF DAY:
From the text it is uncertain what time of day the story is set at. I have early morning.

CHARACTERS PRESENT:
Jesus, in blue outer robe, calling to Simon (on the left) & Andrew.
Fish jumping out of the dropped net. 2 Rock Hydrax, next to Simon & Andrew’s outer robes.

The Sea of Galilee is in Northern Israel, located south & east of the Golan Heights. It is the largest freshwater lake in Israel, and it is approximately about 13 miles (21 km) long, 8 miles (13 km) wide & 33 miles (53 km) in circumference. The lake has a maximum depth of approximately 141 feet (43 metres.)
It is interesting to note that the lake is 685 feet (209 metres) below sea level, which make sit it the lowest freshwater lake on Earth and the second-lowest lake in the world (after the Dead Sea, a saltwater lake, to thye south.)

Geology.
The Sea of Galilee is situated deep in the Jordan Great Rift Valley, the valley caused by the separation of the African and Arabian Plates. It is fed partly by underground springs, although the majority of the fresh water that fills the lake comes from River Jordan, which flows into the lake from the north. The dominant rock type in the area is basalt, a heavy, dark, volcanic (igneous) rock.

Animals.
In my cartoon you can make out 2 Rock Hydrax (Procavia capensis), small, grey, furry creatures, that look like rodents, but actually are related to elephants & manatees. Rock Hydrax eat roots, bulbs, fruits & grasses. They live in groups of up to 50 individuals & are active mainly during the daytime. They prefer rocky areas, scrub & open grassland as their habitat, which is why they are comfortable in the Sea of Galilee area. The two in my cartoon are sitting next to Simon & Andrew’s outer robes (which are held in place by 2 rocks.)

The fish that is jumping in the air is a Tilapia, which is itself a latinization of thiape, the Tswana word for “fish”. Tilapia go by many names, amongst them, “St. Peter’s fish”, which apparently comes from the story in the Holy Bible about Jesus sending the apostle Peter to the lake shore to catch a fish. In it’s mouth he found a four-drachma coin, used to pay the temple tax (see quote below), though the passage does not name the fish.

Matthew 17:27 (ANIV)
“…go to the lake and throw out your line. Take the first fish you catch; open its mouth and you will find a four-drachma coin. Take it and give it to them for my tax and yours.”

Notice Andrews’, “Who, me?!” reaction. In biblical times a disciple didn’t get to choose to be a follower, he had to be chosen, by the teacher or master. Traditionally, a Rabbi or teacher of the Law would only have called the very best, most committed & learned men to become his followers. Jesus was quite different in this regard. He chose “ordinary” men & women to be his disciples. It seems to me that Jesus was able to see into a person’s heart & was able to determine who could serve the cause of Christianity best. It is interesting, & a great encouragement to us all, that Jesus chose “ordinary” men & women to be his followers… people just like you & me.
Even today, Jesus calls us all to become his followers, or disciples. Will you answer the call of Jesus? You won’t regret it if you do.