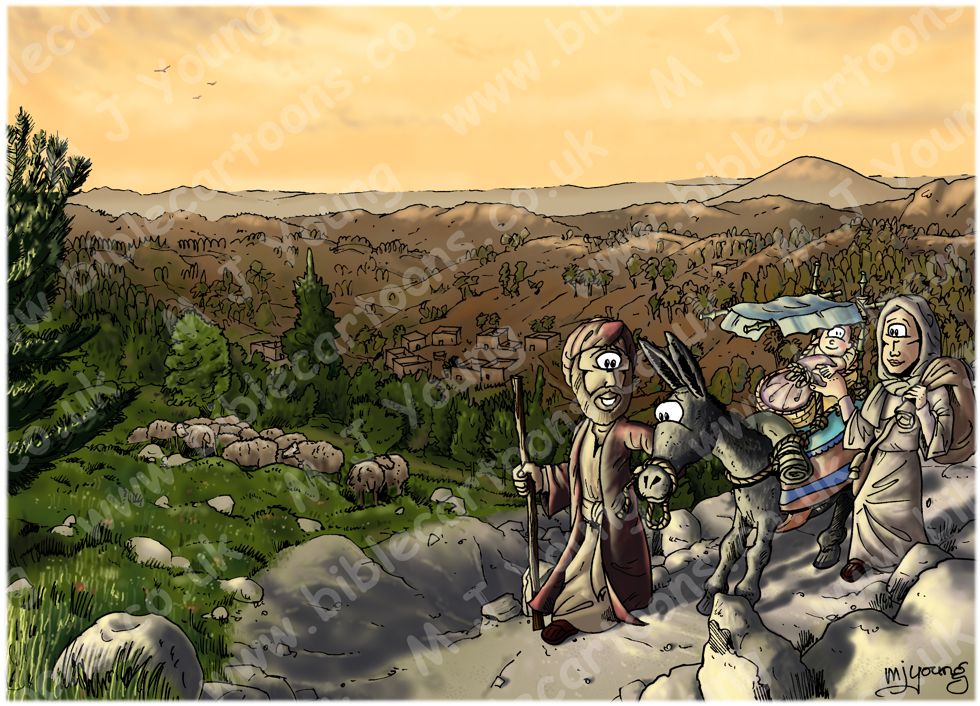 Matthew 2:22-23 (NLT)
22 But when he [Joseph] learned that the new ruler of Judea was Herod’s son Archelaus, he was afraid to go there. Then, after being warned in a dream, he left for the region of Galilee. 23 So the family went and lived in a town called Nazareth. This fulfilled what the prophets had said: “He will be called a Nazarene.”

LIGHTING NOTES:
Day is drawing on & the sun is beginning to descend into the west, which is behind the viewer. Warm reds & oranges are contrasted with cooler greens & blues in the fore & mid grounds. Whilst the sun’s orange glow is contrasted with cooler grey-brown hues on the hills & mount Tabor.
The figures & pathway are highlighted in a yellow white glow coming from the sun.

CHARACTERS PRESENT:
Joseph leading their donkey. Mary is holding on to the cradle in which the infant Jesus has travelled from Egypt to Nazareth.
There are sheep on the hillsides.

RESEARCH/ADDITIONAL NOTES:
Notice that the infant Jesus is holding his mother Mary’s hand as they come to the end of their long trek from Egypt. Notice also that the donkey is “digging his heels in” a bit… perhaps he doesn’t like the steep descent down the rocky track?! Joseph is at the donkey’s head, reassuring & guiding.

I’ve used the same clothing & luggage for the travellers that I established in the previous picture.

To the south of the hills/mountains that surround the valley that Nazareth nestles inside is the valley of Jezreel, with the Carmel mountain range to the west & south west.

Geography:
My research suggests there is some uncertainty about the exact location of the biblical village of Nazareth.

It seems to have been situated on the most southern of the ranges of lower Galilee, among the hills which are referred to as the south ridges of Lebanon, just before they sink down into the plain of Esdraelon (about 10 miles away (16 km)). A rocky gorge descends southward to a plain between two craggy hills.

Nazareth was situated on the southeast slope of a hollow pear shaped basin, which descends gradually from the elevated plateau 1500 feet above sea level and opens out through a steep winding way (the stem of the pear) into the plain of Esdraelon, 1000 feet lower. (source: Bible history.com)

In my picture you can see that the village/town of Nazareth is nestled in a rocky bowl, with hills all around. Joseph is Mary, Jesus & their trusty donkey down quite a steep rocky pathway, which leads into Nazareth.

In the background, behind the hills you can see Mount Tabor.

Geology:
According to geological maps Nazareth is situated on the Mount Scopus Group (Chalk, marl) ranges in thickness from 0–1,640 feet (0–500 metres), it averages about 984 ft (300 metres) thick.

2) “Flint is abundant”; this highly resistant, hard rock could be used as building material for homes & other houses. The buildings in my picture are made of flint nodules (lumps).

In the time of Jesus Nazareth was probably a village or very small town. James F. Strange, an American archaeologist, notes: “Nazareth is not mentioned in ancient Jewish sources earlier than the third century AD. This likely reflects its lack of prominence both in Galilee and in Judaea.”34 Strange originally calculated the population of Nazareth at the time of Christ to be “roughly 1,600 to 2,000 people” but, in a subsequent publication, revised this figure down to “a maximum of about 480.” (source: E. Meyers & J. Strange, Archaeology, the Rabbis, & Early Christianity Nashville: Abingdon, 1981; Article “Nazareth” in the Anchor Bible Dictionary. New York: Doubleday, 1992.)

‘Nazareth is situated on the most southern of the ranges of lower Galilee, about ten miles from the plain of Esdraelon. “You cannot see from Nazareth the surrounding country, for Nazareth lies in a basin; but the moment you climb to the edge of this basin . . . what a view you have. Esdraelon lies before you, with its twenty battlefields—the scenes of Barak’s and of Gideon’s victories, of Saul’s and Josiah’s defeats. There is Naboth’s vineyard and the place of Jehu’s revenge upon Jezebel; there Shunem and the house of Elisha; there Carmel and the place of Elijah’s sacrifice. To the East the valley of Jordan, with the long range of Gilead; to the West the radiance of the Great Sea (The Mediterranean). . . . You can see thirty miles in three directions” (Smith, Hist. Geog., p. 432). Across the plain of Esdraelon emerged from the Samaritan hill the road from Jerusalem and Egypt.

The disrepute in which Nazareth stood (John 1:46) has generally been attributed to the Galileans’ lack of culture and rude dialect; but Nathanael, who asked, “Can any good thing come out of Nazareth?” was himself a Galilean. It would seem probable that “good” must be taken in an ethical sense and that the people of Nazareth had a bad name among their neighbours for irreligion or some laxity of morals.’
(Source: The New Unger’s Bible Dictionary.)

Is it the valley of Jazreel, or the plain of Esdraelon?!
The Valley of Jezreel is often identified as comprising only the eastern end of the Plain of Esdraelon, the valley between between Mount Gilboa and the Hill of Moreh and Mount Tabor (see Mount Tabor). However, Jezreel is often used generally to refer to the entire flat and fertile plain stretching southeast from the coast north of Mount Carmel to the Jordan River at Beth-shan. This area is the boundary between Samaria to the south and Galilee to the north. (source: http://www.crivoice.org/phototour/pjezreel.html) 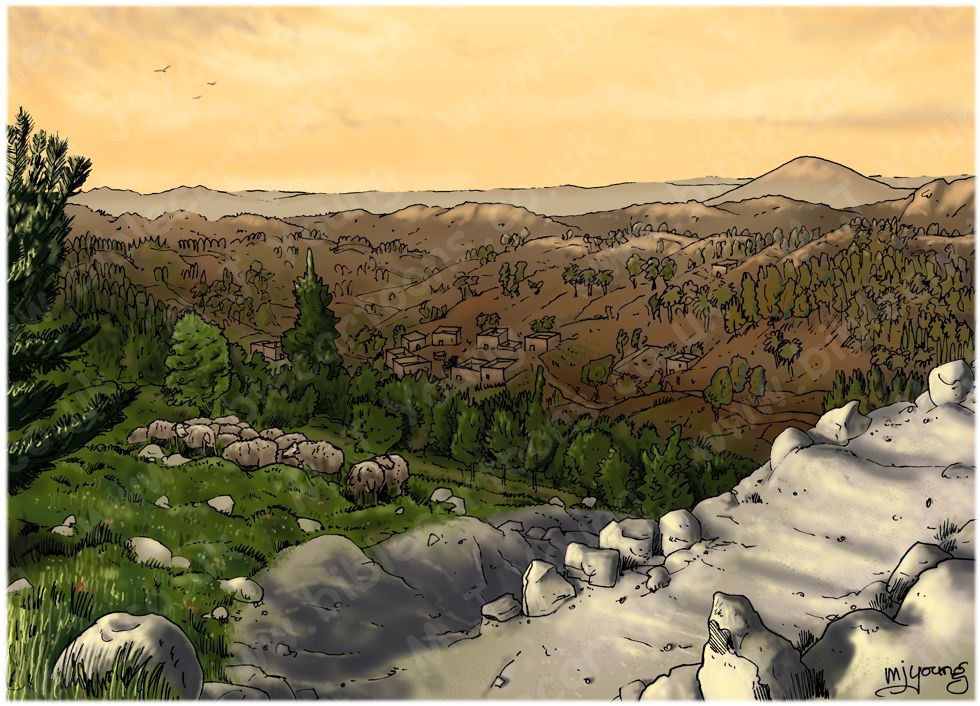