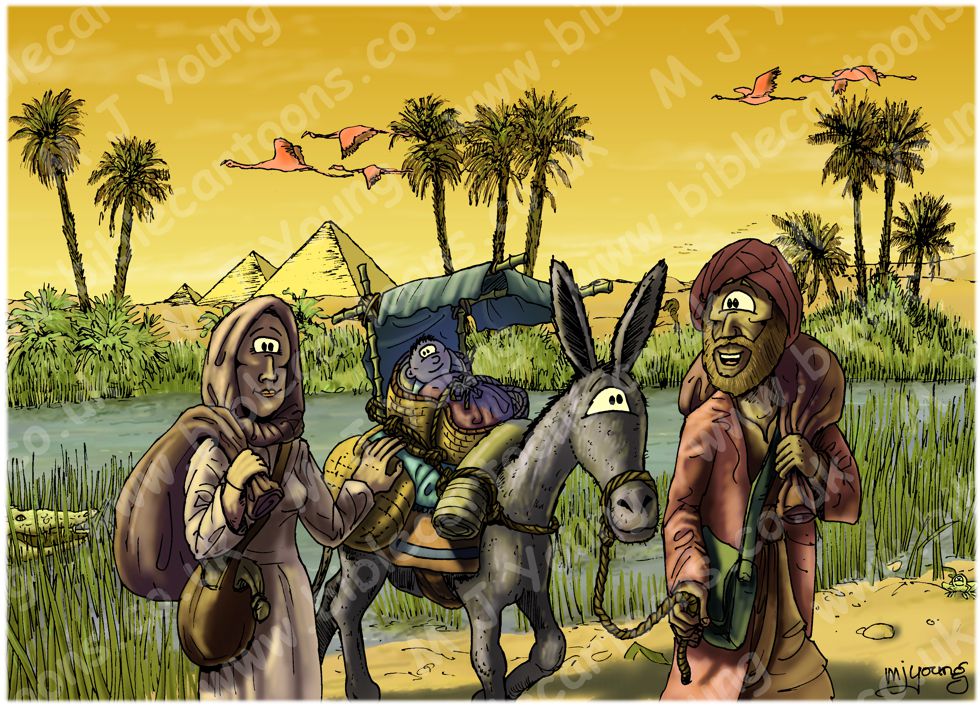 LIGHTING NOTES:
A warm sun is shining from the left, which infuse the scene with warm yellow tones. Shadows are deep & dark, due to the strong sunlight with cast shadows having a blue hue.

RESEARCH/ADDITIONAL NOTES:
There are two versions of this scene. This is what I call the “Gold version.” The river Nile has more subtle, subdued blue hues, whilst the sky is a golden yellow. There is a greater sense of warm tonal dominance in this version.

As noted in the ‘Matthew 02 – The Nativity – Scene 12 – Flight to Egypt’ cartoon, the Bible doesn’t say exactly where in Egypt Joseph, Mary & the infant Jesus fled to. I have chosen to depict them near the Nile rive, with the great pyramids of Giza in the background simply because many viewers will instantly recognise where the characters are with them in the background.

I have reasoned that Mary & Joseph might have made better travelling arrangements upon their return to Israel than on their departure from that country. They left in a hurry, in the night, presumably with little chance to think about how to get an infant to Egypt. But on this planned return, I have shown them with the infant Jesus in a wicker carry cot, securely tied on the back of the donkey. Jesus will be protected from the fierce sun by a make-shift shade over his cot, on the donkey’s back.

The creature in the reeds in the bottom left of the picture is a Nile or Common Crocodile (Crocodylus niloticus)
A very large crocodile averaging an overall length of 16 feet (5 metres) and, perhaps exceeding 18 feet (5.5 metres) (Source: http://nas.er.usgs.gov/queries/FactSheet.aspx?speciesID=2273)

The little light green animal in the bottom right of the picture is a Nile Delta Toad or Damietta Toad (Amietophrynus kassasii.) A newly described species that is abundant in Delta wetlands. It is rather small in size with a maximum recorded length of 4cm. The male makes a distinctive rattle-like call. This toad inhabits flooded swamps and rice fields and is known in Egypt only from the Nile Valley south to Luxor. It is closely related to several Afro-tropical species. (Source: http://www.egyptheritage.com/BiodiversitySite/WildLife/Reptiles.html)

The birds flying past the palm trees are Greater Flamingoes (Phoenicopterus roseus.) 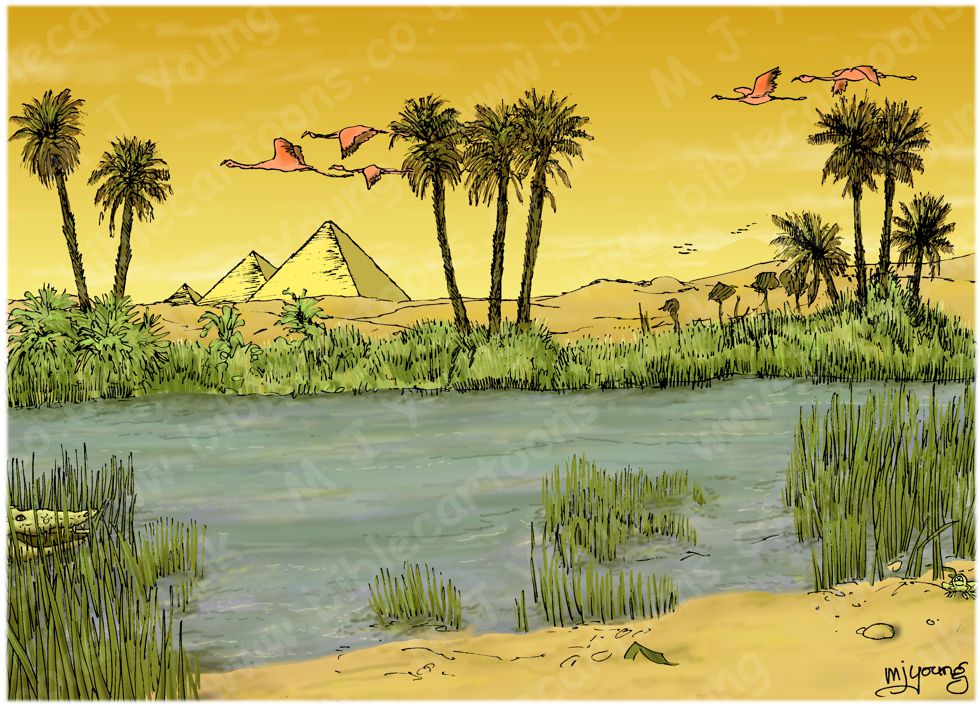