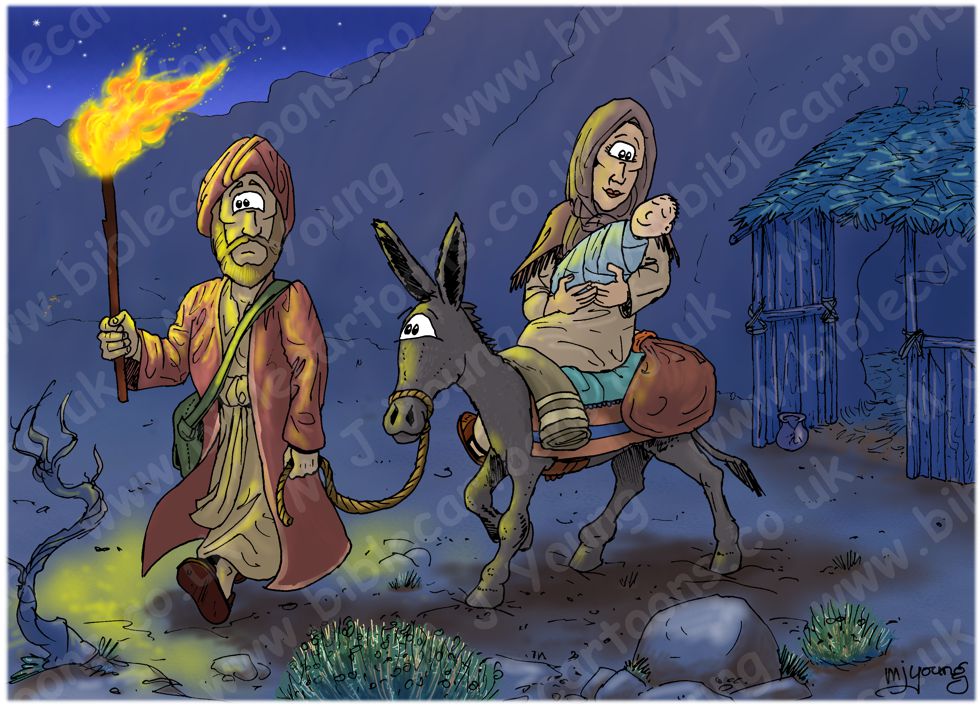 Matthew 2:14-15 (NLT)
14 That night Joseph left for Egypt with the child and Mary, his mother, 15 and they stayed there until Herod’s death. This fulfilled what the Lord had spoken through the prophet: “I called my Son out of Egypt.” [1]

TIME OF DAY:
Verse 14 tells us that Joseph, Mary & Jesus set out for Egypt at night.

LIGHTING NOTES:
Cool, blue tones from the starry night sky are offset by the warm tones coming from the torch that Joseph is carrying aloft to light their way as they start out on the journey to Egypt.

RESEARCH/ADDITIONAL NOTES:
There are two versions of this scene. This is what I call the “night version.” I have increased the cool, night time blue hues, which tend to wash out the warmer brown hues of the figures & landscape. The blues help to show this is a dark, night-time scene. In the previous picture you will see the same scene, but with these warmer, yellow/brown hues intact.

The stable from previous scenes can be seen in the background.

Notice that Joseph has a shoulder bag, & the donkey is carrying bags, a waterskin, etc. Anyone travelling in the wilderness of ancient times would need water, food & other provisions. Apart from the hot, dry climate, wilderness travel would have been potentially dangerous, with many hazards. Rough, rocky terrain would have been difficult to navigate. Steep cliffs, precipices, wild animals & bandits would be a few of the additional dangers of such a trek.

The journey to Egypt would no doubt have taken some time to complete. The Bible doesn’t explicitly say where in Egypt Joseph lead Mary & Jesus. Here are various distances to give you an idea of the journey…

Distances in a straight line:
Bethlehem, Israel to town of Arish1 or Shihor, the Brook of Egypt2 = 92 miles (148 km)
The brook of Egypt was the border bwteen that country & Israel, so was the minimum distance Joseph would have taken Mary & Jesus.

Bethlehem, Israel to city of Rameses, Egypt = 195 miles (314 km)
(Rameses is near the Great & Little Bitter Lakes, today part of the Suez canal.)

Bethlehem, Israel to Pyramids of Giza, Cairo, Egypt = 269 miles (433 km)
Not that Joseph would have gone to the pyramids, but the distance involved in that trek (on foot) is amazing!

Geology
The rock types of the area in & around Bethlehem are mainly limestone, dolomite, dolomitic limestone, marl, chalky marl, chert & chalky limestone. According to geological maps Bethlehem is situated on the Menhua Formation (Chalk, chert).

The Menuha Formation is the name given to an Upper Cretaceous (Santonian-Early Campanian) chalk, marly chalk and conglomeratic chalk unit exposed throughout the Makhtesh Ramon region of southern Israel and parts of northern Israel (Avni, 1991). (Source: Wikipedia)

Although you can’t really tell from the cartoons, I have made the soil/rocks look like limestone. They are coloured blue due to this being a night scene.

Plant
The plant in the foreground is Wormwood (aka mugwort, Motherwort, Bulwand, green-ginger, Sailors tobacco (Artemisia sieberi.)) Wormwood is a steppe plant, dominantly growing in the dry Judean desert & in the Negev.

In hard and fissured limestone and dolomite most of the rain water penetrates the ground and is accumulated in the soil at the fissures and crevices. The water is protected here from direct evaporation. Such rocks support semishrubs on the slopes even in areas with less than 50 mm mean annual rainfall. The most common dominant of these soils is Artemisia sieberi. (Source: Flora of Israel Online, The Hebrew University of Jerusalem. Vegetation of Israel and neighboring countries, chapter C (part 2))

NOTES:
[1] Arish. The city grew around a Bedouin settlement near the ancient Ptolemaic Dynasty outpost of Rhinocolura. In the Middle Ages, pilgrims misidentified the site as the Sukkot of the Bible. Arīsh means “palm huts” in Arabic.
(Source: Wikipedia)

1) The Brook of Egypt is the name used in some English translations of the Bible for the Hebrew Nachal Mitzrayim (“River of Egypt”) used for the river defining the westernmost border of the Land of Israel.

2) Alternatively, early Aramaic translations and Jewish commentaries identify the Brook of Egypt with the Pelusian arm of the Nile—a no longer extant branch of the Nile lying on the border of Ancient Egypt.
(Source: Wikipedia)

If the Brook of Egypt were a branch of the Nile, & Joseph & Mary walked there, then that’s at least 100 miles ( km) further into Egypt than the brook near Arish!