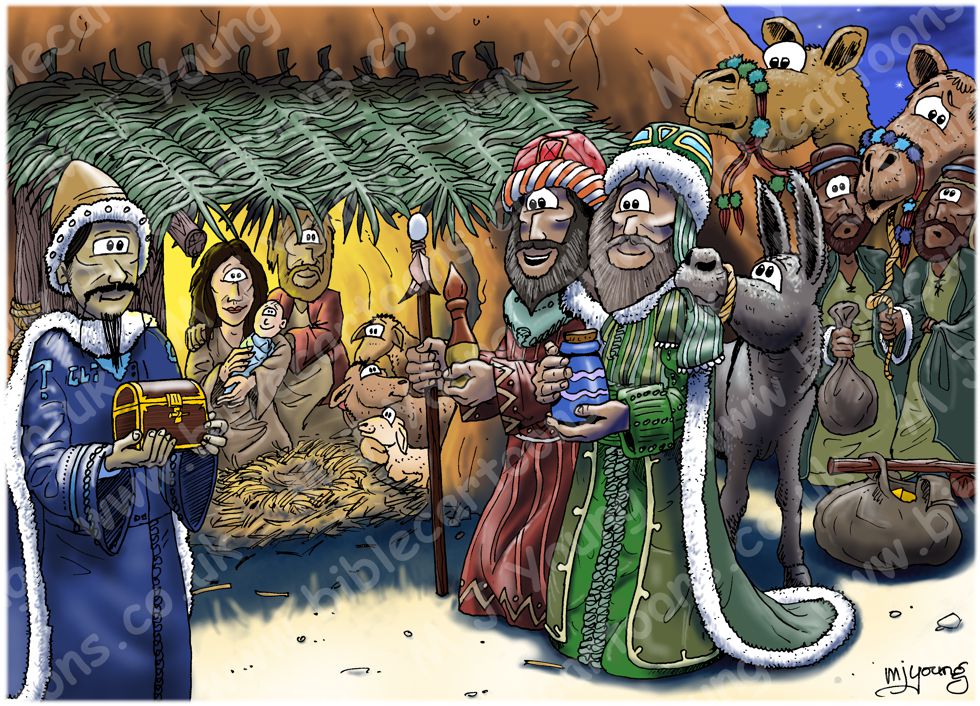 Matthew 2:11 (NLT)
They [the wise men] entered the house and saw the child with his mother, Mary, and they bowed down and worshipped him. Then they opened their treasure chests and gave him gifts of gold, frankincense, and myrrh.

CHARACTERS PRESENT:
The baby Jesus is wrapped in swaddling clothes & held in Mary’s arms, Joseph is kneeling by her side. All three are resting on straw in the stable. Beside them are 2 sheep & a newly born lamb.
On the left of the scene is one of the wise men (dressed in blue robes), his companions are approaching the stable on the right (dressed in red & green robes)
Notice Mary & Joseph’s donkey resting it’s head on the green wise man’s shoulder!
Behind the donkey you can see 2 of the men in the wise men’s camel train, & two of the camels as well. The camel bridle colours & designs on the 2 camels in this scene are identical to the ones used in the previous scene (Matthew 02 – The Nativity – Scene 08 – The star) to maintain continuity between scenes.

I imagine that the wise men would have had a large caravan of camels (or similar beasts of burden), with many men to act as luggage bearers, guards to protect them on dangerous roads, etc. I suspect that 3 lone wise men wouldn’t survive for very long in alien, hostile, bandit-ridden countryside!

RESEARCH/ADDITIONAL NOTES:
This is the latest in my Matthew – The nativity series of cartoon, which aim to depict the traditional Nativity story.

I like to refer to previously drawn scenes, & keep clothing the same, in order to maintain continuity between scenes as much as possible.

1) Matthew 02 – The Nativity – Scene 09 – Gifts (Colour version) is the full colour variation. There is some shadow & highlight, but the main purpose is to provide a colourful variant of the scene, without the blue & darkness of the other 2 versions.

2) Matthew 02 – The Nativity – Scene 09 – Gifts (Starlight version)
This second scene has much deeper shadows, coupled with a colour-depleted palette, caused by the low light levels. Moon & starlight tends to drain a scene of colour & contrast, & this version aims to depict that effect. There are highlights across the tops of the figures, camels, donkey, & other objects, coming from the stars above the scene with illuminate it.

3) Matthew 02 – The Nativity – Scene 09 – Gifts (Blue version)
The 3rd version of this scene has a dramatic colour shift towards the blue end of the spectrum, reflecting a night scene, but avoiding the dark, colour-sapping effects of the starlight version.

The “star”
The wise men were directed to the Messiah by a bright “star” in the heavens. Some scholars have wondered if the star was a comet, or a supernova (star explosion), a planet (such as Jupiter) or a conjunction of planets. It is interesting to note that celestial bodies such as these appear to travel across the sky from east to west (as the earth turns on its axis) not from north to south.

Some scholars have wondered if the “star” was the Shekinah glory of God.

Shekinah: ‘A Chaldee word meaning resting-place, not found in Scripture, but used by the later Jews to designate the visible symbol of God’s presence in the tabernacle, and afterwards in Solomon’s temple.’
(Source: Illustrated Bible Dictionary: And Treasury of Biblical History, Biography, Geography, Doctrine, and Literature.)

The wise men were guided by the star from Jerusalem (after their interview with King Herod) south, to Bethlehem. Remember that the wise men had probably travelled several thousand miles, & for many months, following the star. Perhaps unexpectedly (to them) they had not found the child in the palace of Jerusalem. Realising this, perhaps they continued on their journey with mixed feelings – they didn’t know that they would be led a mere 5 miles (km) south to the place where Jesus had been born.

Worship & gifts
The wise men were led to Jesus, & upon going into the house, they worshipped Him. Notice that verse 11 begins with, “They [the wise men] entered the house…” it is quite likely that the wise men came to worship Jesus some time after his birth. Our traditional Nativity scenes & narration of the story has the wise men arriving on the night of Jesus birth.

The Life Application Commentary has this to say:
Jesus was probably one or two years old (a child) when the wise men found him. By this time, Mary and Joseph were living in a house. The wise men gave expensive gifts because these were worthy presents for a future king. Gold was a gift for a king (Psalm 72:15). Frankincense, a glittering, odorous gum obtained from the bark of certain trees, was a gift for deity (Isaiah 60:6). Myrrh, a valued spice and perfume (Psalm 45:8), also came from trees and was used in embalming; thus, it was a gift for a person who was going to die (Mark 15:23; John 19:39). These gifts certainly would have provided the financial resources for Joseph and Mary’s trip to Egypt and back (2:13-23).
(Source: Life Application New Testament Commentary.)

An alternative view of the significance of the wise men’s gifts comes from Adam Clarke’s commentary:
Rather, they offered him the things which were in most esteem among themselves; and which were productions of their own country. The gold was probably a very providential supply, as on it, it is likely, they subsisted while in Egypt.
(Source: Adam Clarke, A Commentary and Critical Notes.)