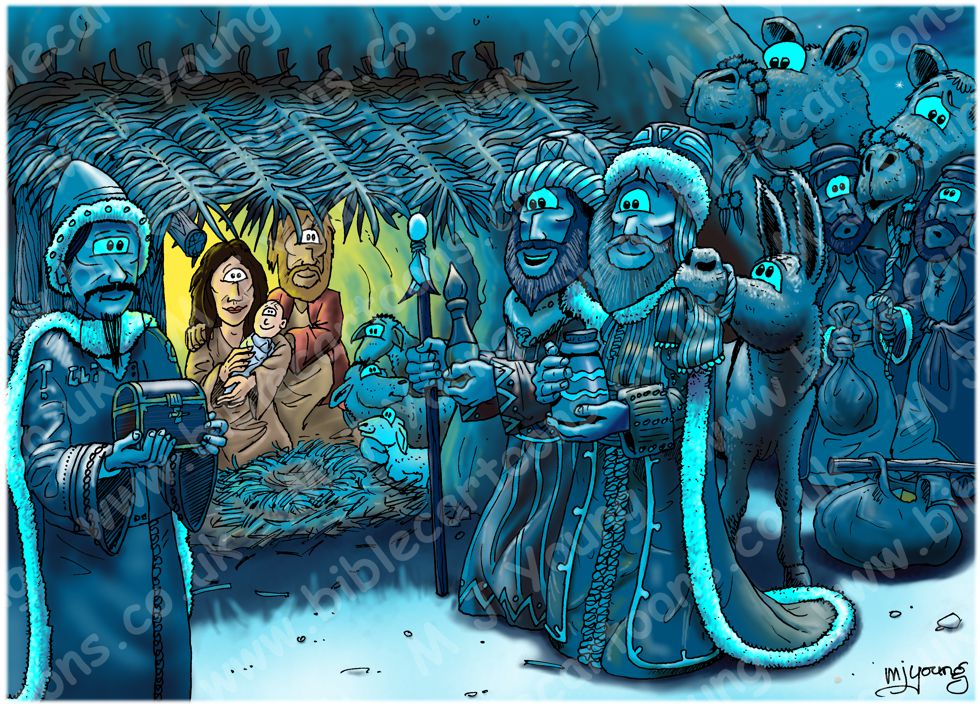 Matthew 2:11 (NLT)
They [the wise men] entered the house and saw the child with his mother, Mary, and they bowed down and worshipped him. Then they opened their treasure chests and gave him gifts of gold, frankincense, and myrrh.

CHARACTERS PRESENT:
The baby Jesus is wrapped in swaddling clothes & held in Mary’s arms, Joseph is kneeling by her side. All three are resting on straw in the stable. Beside them are 2 sheep & a newly born lamb.
On the left of the scene is one of the wise men (dressed in blue robes), his companions are approaching the stable on the right (dressed in red & green robes)
Notice Mary & Joseph’s donkey resting it’s head on the green wise man’s shoulder!
Behind the donkey you can see 2 of the men in the wise men’s camel train, & two of the camels as well. I imagine that the wise men would have had a large caravan of camels (or similar beasts of burden), with many men to act as luggage bearers, guards to protect them on dangerous roads, etc. I suspect that 3 lone wise men wouldn’t survive for very long in alien, hostile, bandit-ridden countryside!

RESEARCH/ADDITIONAL NOTES:
This is the latest in my Matthew – The nativity series of cartoon, which aim to depict the traditional Nativity story.

1) Matthew 02 – The Nativity – Scene 09 – Gifts (Colour version) is the full colour variation. There is some shadow & highlight, but the main purpose is to provide a colourful variant of the scene, without the blue & darkness of the other 2 versions.

2) Matthew 02 – The Nativity – Scene 09 – Gifts (Starlight version)
This second scene has much deeper shadows, coupled with a colour-depleted palette, caused by the low light levels. Moon & starlight tends to drain a scene of colour & contrast, & this version aims to depict that effect. There are highlights across the tops of the figures, camels, donkey, & other objects, coming from the stars above the scene with illuminate it.

3) Matthew 02 – The Nativity – Scene 09 – Gifts (Blue version)
The 3rd version of this scene has a dramatic colour shift towards the blue end of the spectrum, reflecting a night scene, but avoiding the dark, colour-sapping effects of the starlight version.