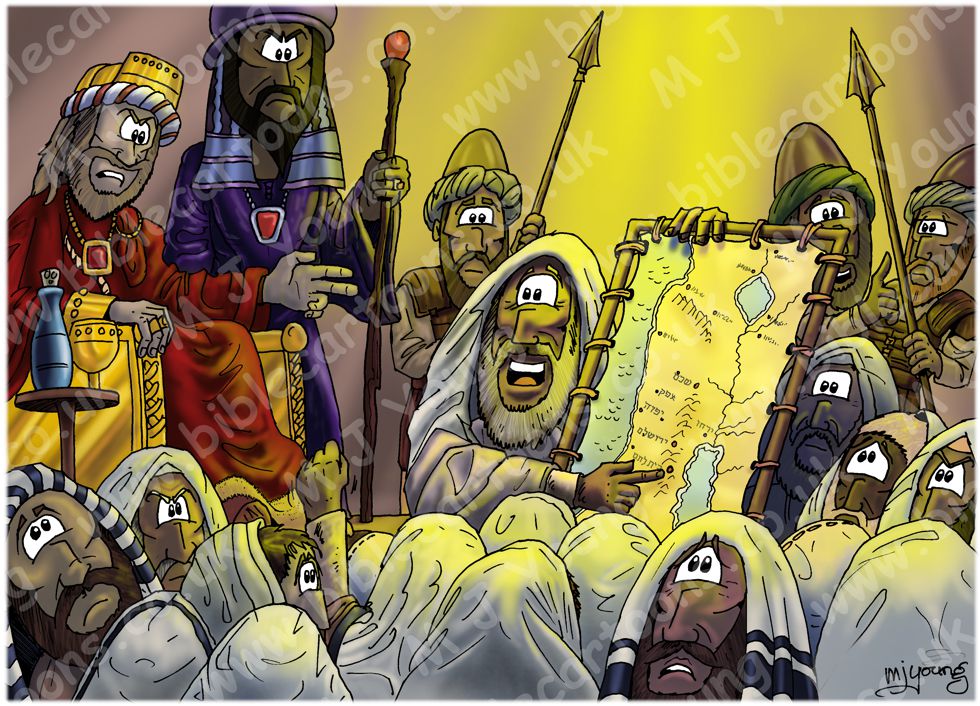 Matthew 2:3-6 (NLT)
3 Herod was deeply disturbed by their question, as was all of Jerusalem. 4 He called a meeting of the leading priests and teachers of religious law. “Where did the prophets say the Messiah would be born?” he asked them.
5 “In Bethlehem,” they said, “for this is what the prophet wrote:

6 `O Bethlehem of Judah,
you are not just a lowly village in Judah,
for a ruler will come from you
who will be the shepherd for my people Israel.’ “

TIME OF DAY:
No particular time of day is mentioned in the text.

LIGHTING NOTES:
This scene is set indoors, the figures are lit by bright yellow torch or candle light from above. Notice the deep shadows below some of the figures features, which contrast the bright yellow light above.

CHARACTERS PRESENT:
King Herod is robed in red & sitting on his palace throne, in the left of the scene. His sneaky looking advisor (dressed in purple) is by his side. In the foreground are many leading priests & teachers of the law. In the back ground there are three temple guards, their leader having a green helmet/turban.

RESEARCH/ADDITIONAL NOTES:
Although this scene precedes the next one (scene 07) in sequence, it has actually been drawn about 15 months after it. The colouring for the figures comes directly from scene 07.

Note: on the map are the Hebrew words “Jerusalem, Shechem, Bethlehem, Jericho, Joppa & Aphek”. I found out how to write them from studying the Blue letter bible on the internet.

I wonder what the chief temple guard is saying to his underling – it looks like he is telling him off for something!