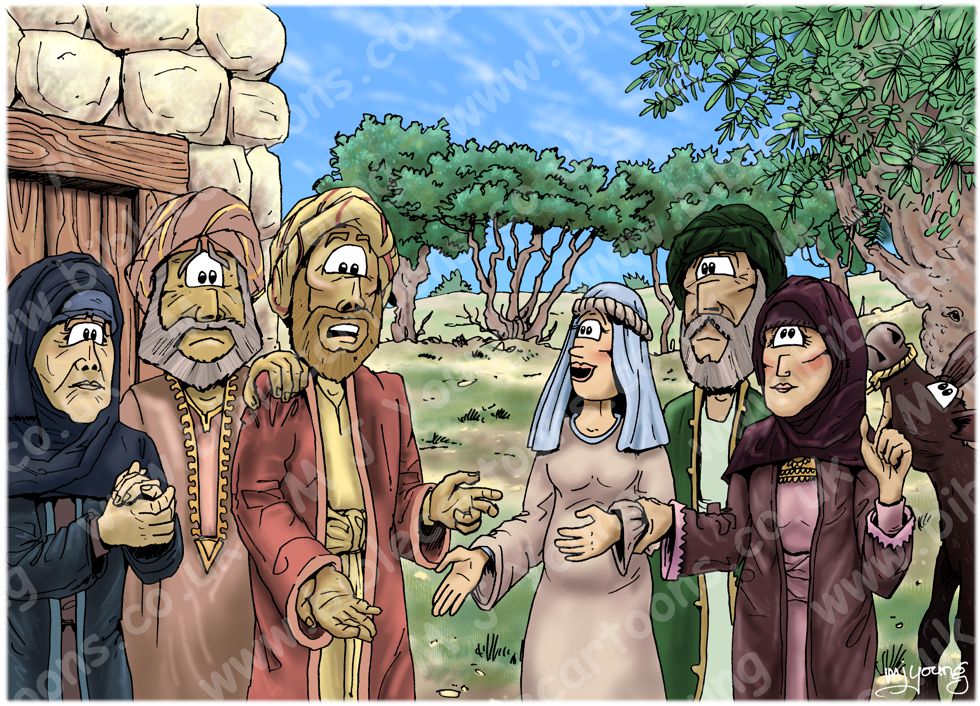 Matthew 1:18-19 (NLT)
18 Now this is how Jesus the Messiah was born. His mother, Mary, was engaged to be married to Joseph. But while she was still a virgin, she became pregnant by the Holy Spirit. 19 Joseph, her fiance, being a just man, decided to break the engagement quietly, so as not to disgrace her publicly.

TIME OF DAY:
Unspecified in the text. I have made it morning.

LIGHTING NOTES:
Simple sunlight, from above, illuminates this scene.

RESEARCH/ADDITIONAL NOTES:
This scene is set near Nazareth, which was where Joseph & Mary were living at this time. Although Matthew’s gospel doesn’t tell us this, Luke’s gospel does (see Luke 2:4.)

Although the scriptures don’t tell us what reaction Mary got from Joseph (and his family!) when she told him she was miraculously pregnant, I image he was a bit surprised, at the very least, hence his expression in my cartoon! We know from the Bible that Joseph had in mind to quietly break the engagement, so as not to disgrace Mary publicly. From that description I can only assume that initially he didn’t believe her when she told him she was pregnant via the Holy Spirit.

In my cartoon Mary is trying to reassure Joseph, whilst her mother (on the right) is point up at the heavens (where the donkey is looking also!) and describing the angelic incident.

Geology:
According to geological maps Nazareth is situated on the Mount Scopus Group (Chalk, marl) ranges in thickness from 0–1,640 feet (0–500 metres), it averages about 984 ft (300 metres) thick.

2) “Flint is abundant”; this highly resistant, hard rock could be used as building material for homes & other houses. The buildings in my picture are made of flint nodules (lumps).

Looking at photographs of the area, the rocks on the soil surface are pale & look like Chalk &/or Marl, which is why I have used pale white, cream & yellow colours for the ground, rocks & building stones in my cartoon.

Figure colour schemes
The colour scheme (skin & hair) for Joseph I established in the cartoon: Matthew 01 – The Nativity – Scene 02 – Joseph & Angel, which was completed & uploaded here on 22/01/2009… a long time ago now!

Similarly, Mary’s colour scheme was established in the cartoon: Luke 01 – The Nativity – Gabriel & Mary, which was uploaded even earlier, on 19/12/2008!

In order to remain faithful to these early cartoons, I have decided to use similar colour schemes in this new one, although I have altered them slightly, making them a little darker & redder in hue.