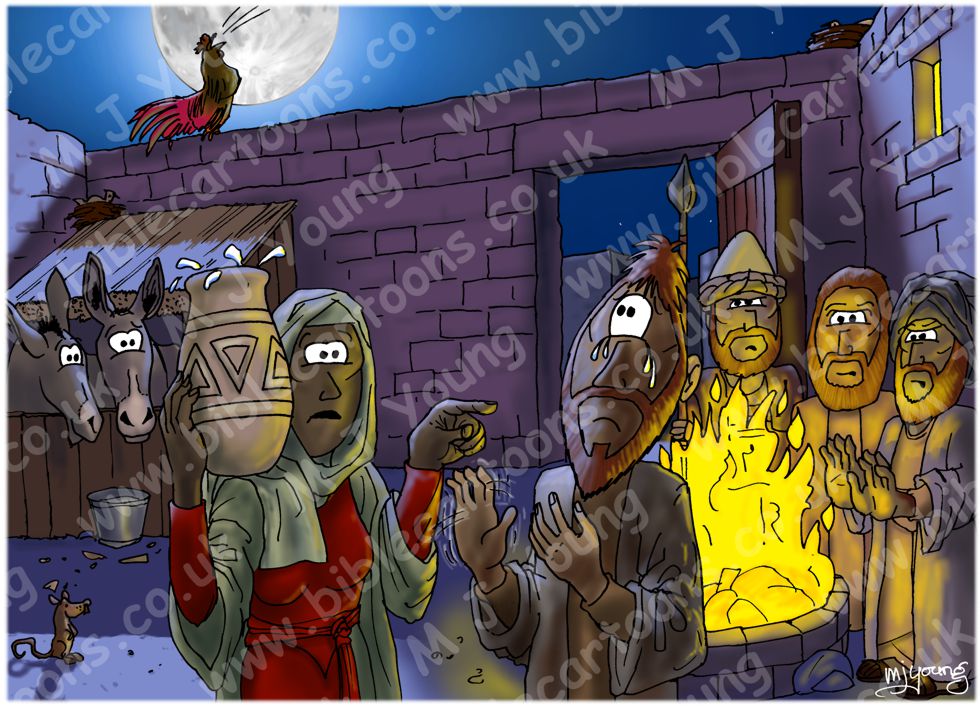 Mark 14:66-72 (NLT)
66 Meanwhile, Peter was below in the courtyard. One of the servant girls who worked for the high priest 67 noticed Peter warming himself at the fire. She looked at him closely and then said, “You were one of those with Jesus, the Nazarene.”
68 Peter denied it. “I don’t know what you’re talking about,” he said, and he went out into the entryway. Just then, a rooster crowed. [1] 69 The servant girl saw him standing there and began telling the others, “That man is definitely one of them!”
70 Peter denied it again. A little later some other bystanders began saying to Peter, “You must be one of them because you are from Galilee.”
71 Peter said, “I swear by God, I don’t know this man you’re talking about.” 72 And immediately the rooster crowed the second time. Suddenly, Jesus’ words flashed through Peter’s mind: “Before the rooster crows twice, you will deny me three times.” And he broke down and cried.

[1]
Some manuscripts do not include, Just then, a rooster crowed.

TIME OF DAY:
Night, before dawn.

LIGHTING NOTES:
As with the previous scenes in this Mark 14 – Jesus arrested series, this scene has 2 sources of light. The first is the warm yellow glow from the fire pit, the second is the cool blue glow emanating from the full moon..

CHARACTERS PRESENT:
We see Simon/Peter in the foreground, being confronted by a servant girl, carrying a water jar. She is pointing at Simon/Peter & saying, “You were one of those with Jesus, the Nazarene.” Simon/Peter has tears in is eyes, & we can see the rooster crowing for the second time, high up on the wall of the courtyard, silhouetted against the full moon.
The 2 men who we saw talking to each other in the cartoon: Mark 14 – Jesus arrested – Scene 04 – In the high priest’s courtyard, & the temple guard from that scene, are here warming themselves by the fire & looking suspiciously at Simon/Peter.
There are 2 donkeys in a stable behind the servant girl, & a rat on the moon lit ground.
There are also 2 birds in nests on the thatched stable roof & on the courtyard wall.

I have assumed that this scene is set some time in the night, perhaps just before dawn, since roosters are supposed to start crowing then. However, since I live by a rooster that crows at any time of the day or night, you can not guarantee the time of day based on that!

The previous scene: Mark 14 – Jesus arrested – Scene 04 – In the high priest’s courtyard, shows the scene from the vantage point of Simon/Peter at the gateway, looking into the courtyard of the high priest. This scene, Mark 14 – Jesus arrested – Scene 07 – Simon/Peter & the rooster, reverses the vantage point, & looks out from the courtyard, towards the gate & into the city of Jerusalem beyond.