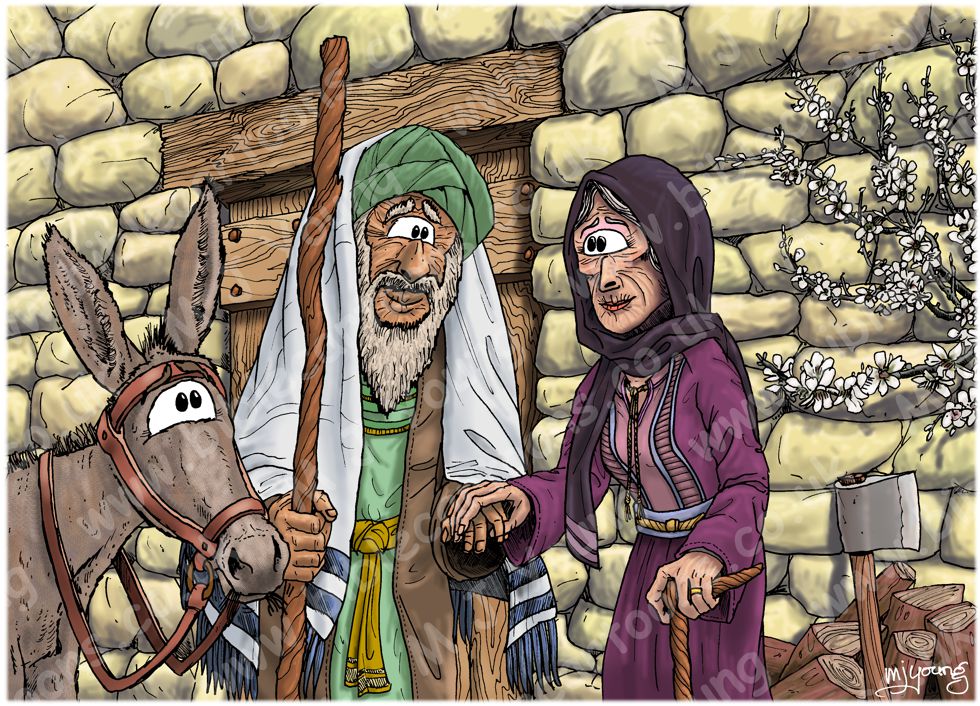 Luke 1:5-7 (NLT)
5 When Herod was king of Judea, there was a Jewish priest named Zechariah. He was a member of the priestly order of Abijah, and his wife, Elizabeth, was also from the priestly line of Aaron. 6 Zechariah and Elizabeth were righteous in God’s eyes, careful to obey all of the Lord’s commandments and regulations. 7 They had no children because Elizabeth was unable to conceive, and they were both very old.

TIME OF DAY:
Indeterminate; I’ve set the scene in the mid morning.

CHARACTERS PRESENT:
Zechariah and Elizabeth, with their donkey.

RESEARCH/ADDITIONAL NOTES:
This is the second scene in this “Births foretold” series of Bible cartoons.

Notice the axe, leaning on the wall with the wood pile & the white almond blossom. I deliberately chose an axe & white coloured blossom, because these are two of the symbols associated with John the Baptist.

I have also positioned Zechariah’s staff (vertically) & the wooden lintel of the door behind him (horizontal) to deliberately represent the cross of Jesus. My intention is to show a prophetic connection between Zechariah, Elizabeth & their son (John the Baptist) with Jesus the Christ.

Notice Zechariah is wearing travelling clothes in this scene, as he is about to ride the donkey from their home to the temple in Jerusalem. Once there he will change into his Temple garments, which are white in colour (see the next scene in the sequence). 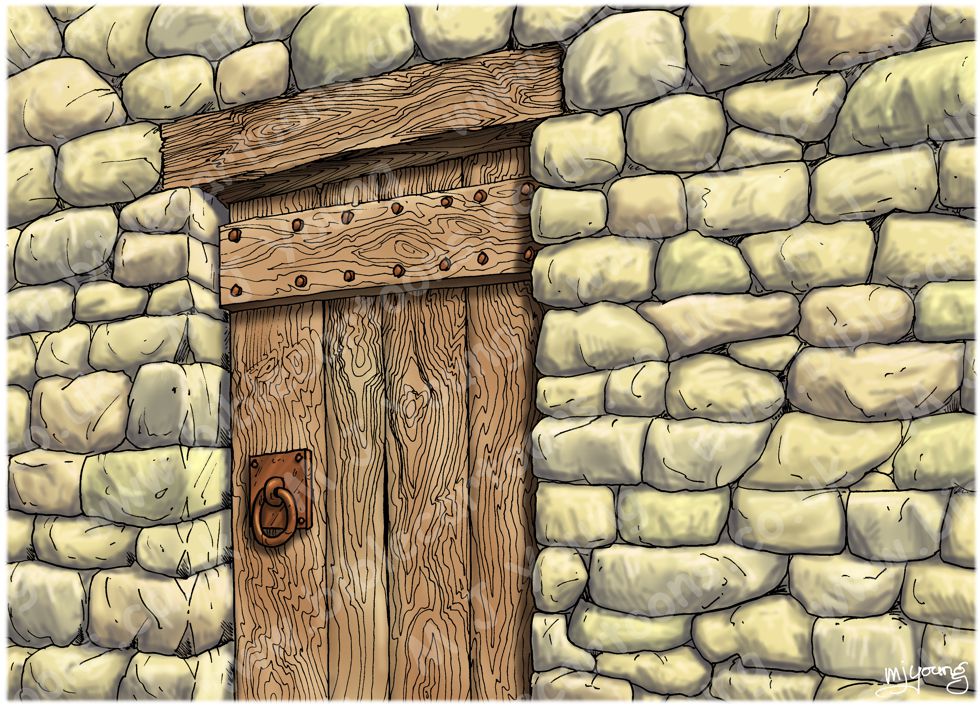 Who was Zechariah and his wife Elizabeth?
There is not a great deal of information about these two people. The name Zechariah (aka Zacharias) means “Jehovah remembers”, “Jehovah has remembered” or “Jehovah is renowned.”
The name Elizabeth (aka Elisabeth) means “God her oath”, or “God is (my) oath” i.e. a worshipper of God.

We know from the Bible account above that Zechariah was a priest of the order of Abijah, & was a descendent of Aaron (the first High priest of God, who was consecrated in that role about 1445 BC (Source: Bible Timeline from http://biblehub.com/timeline/))

Similarly Elizabeth was also directly related to Aaron. The significance of that is that their son (John the Baptist) was also therefore directly from the line of Aaron; priestly lineage which John the Baptist woulkd fulfil.

Where did Zechariah & Elizabeth live?
Luke 1:39-40 (NLT) says, “A few days later Mary hurried to the hill country of Judea, to the town where Zechariah lived.” Various Bible translations refer to a town, or a city in the hill country of Judea, although the exact name of the place is not recorded in the Bible. Adam Clarke (the Bible commentator) thinks the city of Hebron (the city of the priests (see Joshua 21:11) may be the place where Zechariah & Elizabeth lived.

I have set the home of Zechariah & Elizabeth in Hebron, which is an area of Limestone, dolorstone & marl geology, hence the light coloured stones used in the walls of the home.

The words Luke chooses to describe Zechariah and Elizabeth are the same ones used in the Old Testament to describe some other very notable, righteous characters, such as Noah (Genesis 6:9), Abraham (Genesis 17:1) and Job (Job 1:1).

A note on childlessness.
Despite this upright, righteous reputation Zechariah & Elizabeth were also childless, which was a source of distress &/or embarrassment to Elizabeth, & probably to them both. Verse 25 gives us Elizabeth’s view of her bareness, “How kind the Lord is!” she exclaimed. “He has taken away my disgrace of having no children.” – Luke 1:25 (NLT) which tell us what she thought about her condition: disgraceful. To understand this we must look at the Jewish mindset: in the law barrenness was sometimes a judgment for sin, and so many people assumed that a barren woman (or couple) were being punished for some wrong-doing by God. Furthermore, many people assumed that barrenness was a defect of the wife, & Jewish teachers often urged a man to divorce a childless wife in order that he could have children by another wife. Also, having no children meant that there would be no-one to support parents approaching old age. We see from this mindset that being childless was both economically & socially disastrous. To the Jewish mind it would also be contradictory to be described as righteous, but to be childless. Luke makes it abundantly clear (by the birth of John the Baptist) that his parents were indeed righteous.

With that background in mind we can see why becoming pregnant in her older age was so delightful & significant to Elizabeth, since, in her mind it relieved her of the social & economic stigma of barrenness.

It is interesting to note that Elizabeth was not the only barren woman to suddenly be blessed by God with a child in the Bible. Here are four others:

Parallels between Abraham & Sarah and Zechariah & Elizabeth.
Here are 6 parallel’s to note about these couples:

1)
Both couples are blessed with a son in their old age.

2)
Both sons would grow up to serve a key role in the fulfilling of God’s covenant (promises) to his people.
Note: that connection is recognised by Zechariah, who praises God for remaining faithful to the covenant with Abraham (see Luke 1:73.)

3)
Both couples receive news of their child from heavenly visitors, or angels.

4) One spouse believes the announcement, whilst the other does not.
Abraham and Elizabeth believe the angels, whilst Sarah and Zechariah are filled with doubt/unbelief, as shown by their responses below:

Genesis 18:10-12 (NLT)
10 Then one of them [angels] said, “I will return to you about this time next year, and your wife, Sarah, will have a son!” Sarah was listening to this conversation from the tent. 11 Abraham and Sarah were both very old by this time, and Sarah was long past the age of having children. 12 So she laughed silently to herself and said, “How could a worn-out woman like me enjoy such pleasure, especially when my master—my husband—is also so old?”

Zechariah’s questioning of Gabriel reveals his disbelief:
Luke 1:18 (NLT)
18 Zechariah said to the angel, “How can I be sure this will happen? I’m an old man now, and my wife is also well along in years.”

5) Connection to Jesus.
Zechariah is literally speechless for a few month’s – a product of his own disbelief. This is an “echo” of the previous 400 years of Israel’s history (up until this time) where no prophet has been speaking to the Hebrew nation. Zechariah’s returned voice is a metaphor foreshadowing the return of a prophet to Israel: John the Baptist (Zechariah’s coming son.)
In turn, John’s prophetic ministry in the wilderness (preaching, teaching, rebuking, baptising) would prepare the way for the coming of Jesus the Christ: the Word of God in human form, the Promised Messiah. Jesus was thus the culmination & ultimate fulfilment of the Abrahamic Covenant, spoken by God over 2100 years earlier.

6) Lamb of God.
God tests Abraham’s faith by commanding him to offer his son Isaac as a sacrifice, but stops him & provides a substitute (a ram) instead of his son (see Genesis 22.)
In the same way, John the Baptist would point to Jesus the Christ, calling him “the Lamb of God” (see John 1:29), a title indicating Jesus’ future sacrifice on the cross, paying for all people’s sins, for all time.

Bible references
[1]
Genesis 16:1a (NLT)
1 Now Sarai, Abram’s wife, had not been able to bear children for him.

Genesis 17:15-16 (NLT)
15 Then God said to Abraham, “Regarding Sarai, your wife—her name will no longer be Sarai. From now on her name will be Sarah. 16 And I will bless her and give you a son from her! Yes, I will bless her richly, and she will become the mother of many nations. Kings of nations will be among her descendants.”

[2]
Genesis 29:31 (NLT)
31 When the Lord saw that Leah was unloved, he enabled her to have children, but Rachel could not conceive.

Genesis 30:22-24 (NLT)
22 Then God remembered Rachel’s plight and answered her prayers by enabling her to have children. 23 She became pregnant and gave birth to a son. “God has removed my disgrace,” she said. 24 And she named him Joseph, for she said, “May the Lord add yet another son to my family.”

[3]
1 Samuel 1:2 (NLT)
2 Elkanah had two wives, Hannah and Peninnah. Peninnah had children, but Hannah did not.

1 Samuel 1:19b-20 (NLT)
19b… Then they returned home to Ramah. When Elkanah slept with Hannah, the Lord remembered her plea, 20 and in due time she gave birth to a son. She named him Samuel, for she said, “I asked the Lord for him.”

[4]
Judges 13:2-3 (NLT)
2 In those days a man named Manoah from the tribe of Dan lived in the town of Zorah. His wife was unable to become pregnant, and they had no children. 3 The angel of the Lord appeared to Manoah’s wife and said, “Even though you have been unable to have children, you will soon become pregnant and give birth to a son.

[Italics added by MY for emphasis regarding barrenness, pregnancy & birth.]