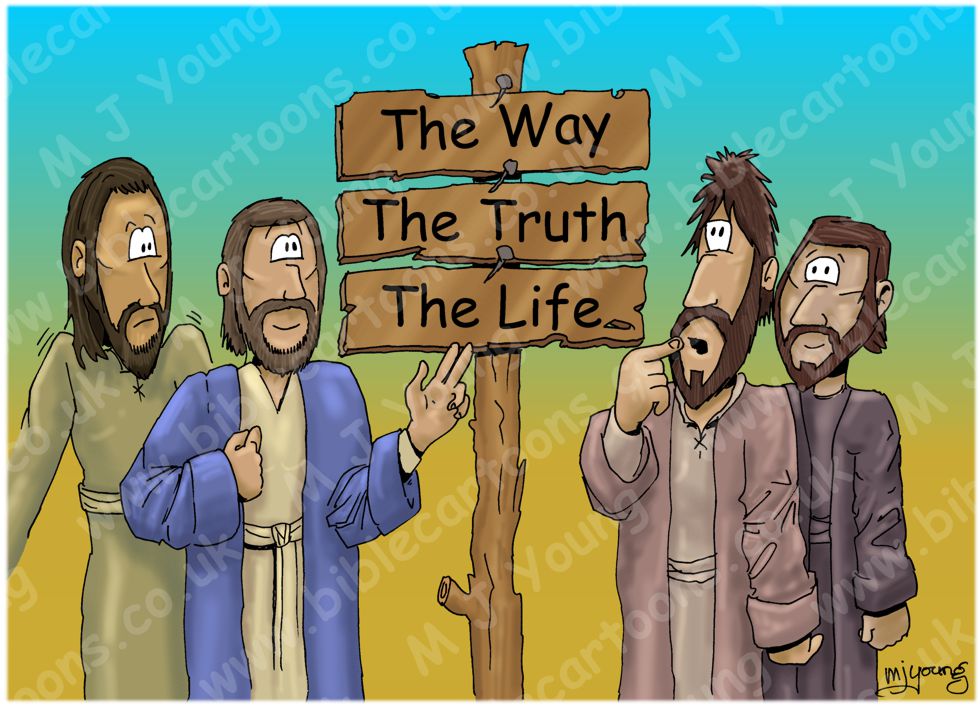 John 14:5-7 (NLT)
Jesus, the way to the Father
5 Thomas said to him, “Lord, we don’t know where you are going, so how can we know the way?”
6 Jesus answered, “I am the way and the truth and the life. No-one comes to the Father except through me. 7 If you really knew me, you would know [1] my Father as well. From now on, you do know him and have seen him.”

[1]
Some early manuscripts, If you have really known me, you will know…

RESEARCH/ADDITIONAL NOTES:
This is a straight forward cartoon, out of my imagination – no reference material gathered, except reference to the various character sheets that I have made for the disciples & Jesus.

I wanted to draw this carton because Jesus’ claim is pivotal to Christianity.

This is the sixth of 7 famous statements that Jesus made, starting with “I am…”.

01. The Bread Of Life
Then Jesus declared, “I am the bread of life. He who comes to me will never go hungry, and he who believes in me will never be thirsty. (John 6:35)

02. The Light Of The World
When Jesus spoke again to the people, he said, “I am the light of the world. Whoever follows me will never walk in darkness, but will have the light of life.” (John 8:12)

What might Jesus have meant by referring to himself as the way, the truth & the life?
This is the sixth of the seven “I am” statements that Jesus spoke (only recorded in John’s Gospel), made by Jesus during the last supper, the night before his betrayal by Judas Iscariot.

Point 01. By saying “I am” Jesus was declaring that he was divine, something which the Jewish leaders thought was blasphemous & worthy of death. The words “I AM” reflect the very name of God in Hebrew (Yahweh), which means “to be” or “the self-existing one.” It is the name of power and authority, and Jesus claimed it as His own.

Point 02. A way is a track or path, & Jesus used the definite article to distinguish Himself as “The (only) way.” There is no other path to heaven, no other way to God the Father. The exclusive nature of the (only) path to salvation is expressed in Jesus’ words “I am the way.” As He had told his discuiples from the beginning, Jesus was again telling them (and by inference us Christian believers) to “follow me.” Peter reiterated this same truth years later to the rulers in Jerusalem, saying about Jesus, “Salvation is found in NO ONE ELSE, for there is NO OTHER NAME under heaven given to men by which we must be saved” (see Acts 4:12).

Point 03. Jesus said that He came to fulfill the Law and the prophets (see Matthew 5:17). Jesus, as the incarnate Word of God (John 1:1) is the source of all truth. In his “I am” statement, Jesus used the definite article once more, to emphasize Himself as “the ONLY (source of all) truth.”

Point 04. In John 10:17-18, Jesus declared that He was going to lay down His life (for His sheep, ie Christian believers), and then take it back again, a most unusual statement, but one which is either true or false. Jesus did die on the cross, and was then resurrected back to life, which proves the point he made! He spoke of His authority over life and death as being granted to Him by the Father. In John 14:19, Jesus made the promise that “because I live, you also (his disciples) will live.” The Jews were after a social, political deliverance from their Roman occupiers. But Jesus was providing an infinitely greater deliverance than that; from a life of bondage to sin and death.

Point 05. By these words, Jesus was declaring Himself the great “I AM”, the only truth, the only way, the only life. He was explaining to his disciples that he was & is the God of Creation, the Holy One who inhabits eternity. Jesus told his disciples who he was, & yet they didn’t really believe him. Even after the resurrection, it took a few visits from Jesus to convince them that he really HAD risen from the dead, & that he really is God. But once they understood the truth of His words, his disciples (unschooled men) became changed, empowered people, and the world has never been the same since that time.