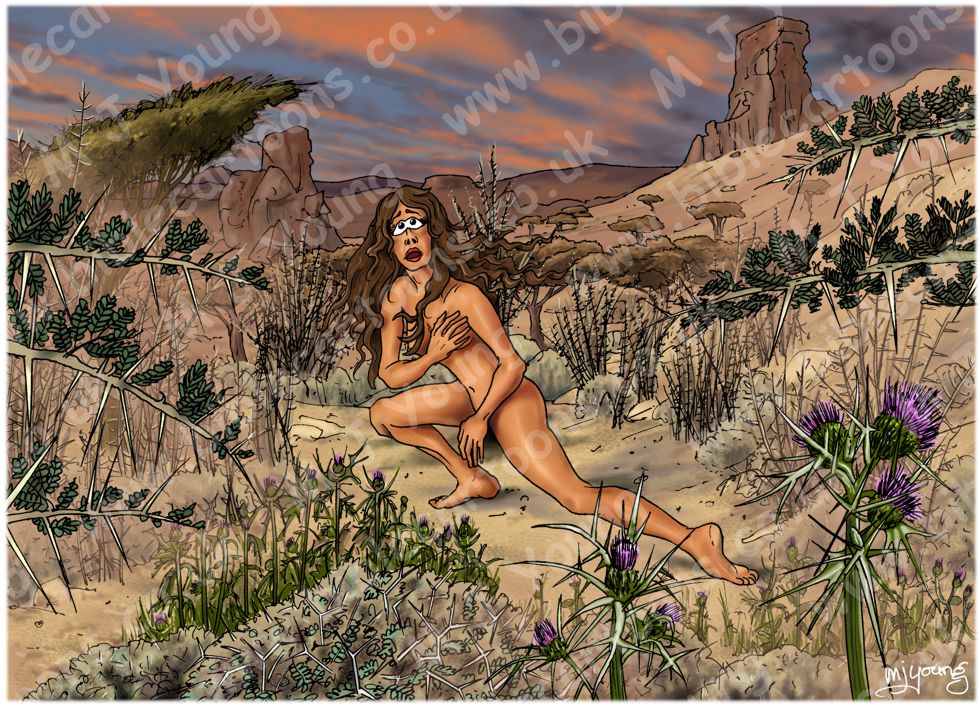 [Israel punished & restored]
2 “Rebuke your mother, rebuke her,
for she is not my wife,
and I am not her husband.
Let her remove the adulterous look from her face
and the unfaithfulness from between her breasts.
3 Otherwise I will strip her naked
and make her as bare as on the day she was born;
I will make her like a desert,
turn her into a parched land,
and slay her with thirst.
4 I will not show my love to her children,
because they are the children of adultery.
5 Their mother has been unfaithful
and has conceived them in disgrace.
She said, ‘I will go after my lovers,
who give me my food and my water,
my wool and my linen, my oil and my drink.’
6 Therefore I will block her path with thornbushes;
I will wall her in so that she cannot find her way.
7 She will chase after her lovers but not catch them;
she will look for them but not find them.
Then she will say,
‘I will go back to my husband as at first,
for then I was better off than now.’
8 She has not acknowledged that I was the one
who gave her the grain, the new wine and oil,
who lavished on her the silver and gold—
which they used for Baal.

9 “Therefore I will take away my grain when it ripens,
and my new wine when it is ready.
I will take back my wool and my linen,
intended to cover her nakedness.
10 So now I will expose her lewdness
before the eyes of her lovers;
no-one will take her out of my hands.
11 I will stop all her celebrations:
her yearly festivals, her New Moons,
her Sabbath days—all her appointed feasts.
12 I will ruin her vines and her fig-trees,
which she said were her pay from her lovers;
I will make them a thicket,
and wild animals will devour them.
13 I will punish her for the days
she burned incense to the Baals;
she decked herself with rings and jewellery,
and went after her lovers,
but me she forgot,”
declares the Lord.

LIGHTING NOTES:
The setting sun (off to the left in this scene) is making the clouds orange, & the scene generally quite dark.

RESEARCH/ADDITIONAL NOTES:
The book of Hosea is all about Israel’s unfaithfulness to God, & what the Lord has to say about that, using the prophet Hosea. Chapter 2 is the beginning of the Lord’s assessment of Israel’s behaviour.

I thought it might be good to show you this scene without the woman, or the Acacia branches in it, which shows more of the background scenery – see below. 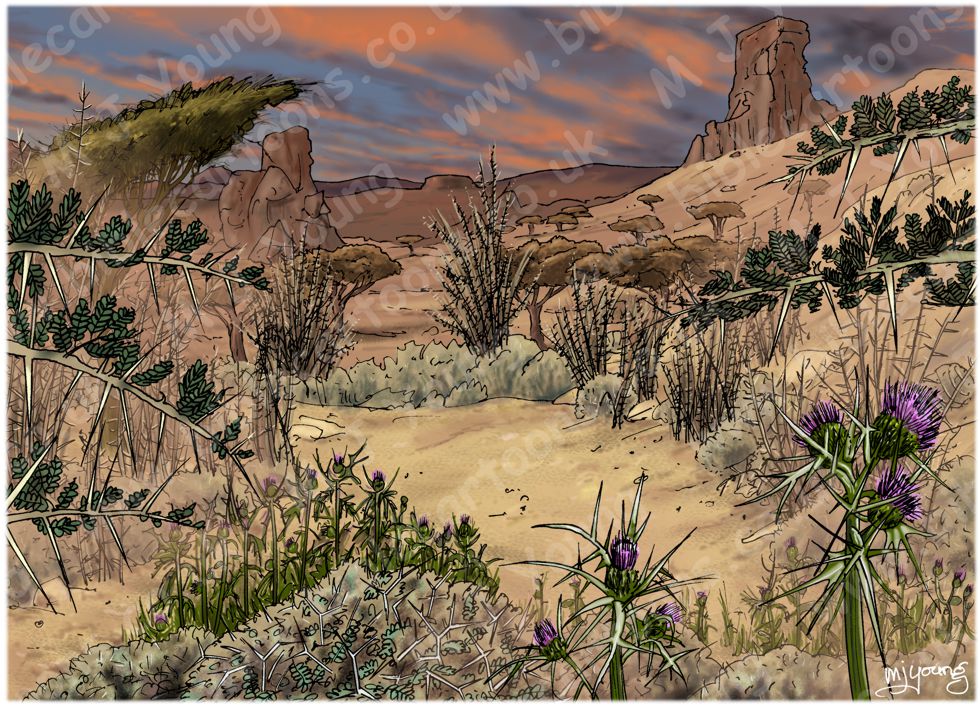 Verse 1 really should belong to chapter 1, for some reason Bible translators (who inserted the verse numbers & sub-titles) included it in chapter 2!

I have decided to personify Israel as described in verse 3:
3 Otherwise I will strip her naked
and make her as bare as on the day she was born;
I will make her like a desert,

Additionally I have put the woman in a desert setting, & surrounded her with thorn bushes, as described in verse 6.

I have drawn the woman hugging herself & looking up (towards God in heaven) horrified.
I have deliberately positioned the woman’s hair & hands/arms to preserve modesty in this picture! I don’t want to shock or embarrass my viewers, but equally I wanted to illustrate the shocked look of “Israel” as she finds herself suddenly naked in the desert, surrounded by thorn bushes.

Here is an interesting Bible commentary on these verses:

“In verse 5 Israel’s unfaithfulness is vividly pictured. She resolved to pursue her lovers (the Baals; cf. vv. 13, 17; 11:2) because she believed they supplied her physical nourishment (food… water), protection (wool and… linen; cf. 2:9), and pleasure (oil and… drink). In response the Lord declared that He would soon eliminate all means of access to these lovers. Israel would find familiar paths blocked with thorns and stone walls (v. 6). Her frantic efforts to find her lovers would be thwarted (v. 7a). As a last resort, she would resolve to return to her Husband, the Lord, opening the way for restoration. The reality behind this figurative portrayal of judgment probably included drought, invasion, and exile (cf. vv. 9, 11-12; Lev. 26:18-22).”
[Source: The Bible Knowledge Commentary: An Exposition of the Scriptures by Dallas Seminary Faculty.]

The Message bible version states the verse like this:

Based on these translations I decided to drawn spiny Syrian Thistles in the foreground, with thorny Acacia thorn bushes in the mid to background.

Plants I have used in this scene.
In the foreground you can see Syrian Thistle (Notobasis syriaca, Cirsium syriacum, Cnicus syriacus) which typically grows to 12-40 inches (30–100 cm) tall. The purple flowers are produced in a dense flowerhead (capitulum) about 0.7 inches (2 cm) in diameter. There are several spiny bracts surrounding the base of the flower. The grey-green with white veined leaves are arranged in a spiral on the stem, with sharp spines on the edges and leaf tip (apex.)

There is a close up of two of these thistles in the lower right foreground.

There is a close up of one of these thorny bushes in the middle foreground.

The taller bushes in the foreground, & all of the trees in the background are Umbrella Thorn Acacia (Vachellia tortilis, widely known as Acacia tortilis) aka umbrella thorn and Israeli babool)) which grow to about 13-23 feet (4-7 metres) in height. These spiny plants live in Semi-steppe shrublands, Shrub-steppes, Deserts and extreme desert habitats being thermophilous (heat-loving). The common name Umbrella Thorn Acacia comes from the umbrella shaped canopy the plant produces, usually from a single trunk.

In extremely arid (waterless) conditions these plants only grow as bushes.

There is a close up of the wickedly long spines & small leaves of this acacia in the middle right & left foreground of the scene.

Other references to “thorns” in Hosea.
Hosea 9:6
Even if they escape from destruction, Egypt will gather them, and Memphis will bury them. Their treasures of silver will be taken over by briers, and thorns will overrun their tents.

The word for briers is qimmôwsh (kim-moshe’) & can also be translated “weeds”. The Hebrew word also carries the asense of “hook, ring, fetter”, something that binds & restrains a person.

Hosea 10:8
The high places of wickedness will be destroyed— it is the sin of Israel. Thorns and thistles (Kotz weDardar, קוץ ודרדר ) will grow up and cover their altars. Then they will say to the mountains, “Cover us!” and to the hills, “Fall on us!”

View all Bible Cartoons in Hosea Go to Search by Bible Book page Do I need High or Medium qlty cartoons? FAQ’s