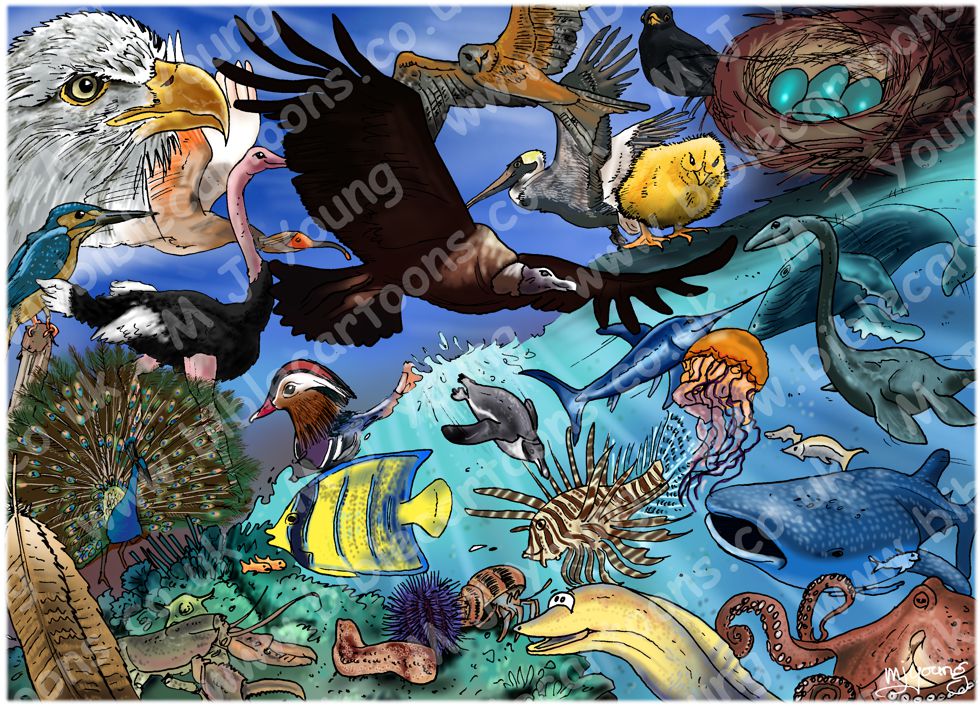 Genesis 1:20-23 (NLT)
20 Then God said, “Let the waters swarm with fish and other life. Let the skies be filled with birds of every kind.” 21 So God created great sea creatures and every living thing that scurries and swarms in the water, and every sort of bird—each producing offspring of the same kind. And God saw that it was good. 22 Then God blessed them, saying, “Be fruitful and multiply. Let the fish fill the seas, and let the birds multiply on the earth.” 23 And evening passed and morning came, marking the fifth day.

LIGHTING NOTES:
Light is entering the sea & causing beams of light to permeate the deep.

CHARACTERS PRESENT:
God is present, of course. See below for the list of birds, fish & other animals present in this scene.

RESEARCH/ADDITIONAL NOTES:
I decided to have this split-screen view, showing both the birds of the air & the fish of the sea in the same scene. I wanted to show some of the varieties of fish & birds which the Lord has created. Rather than just create one type the Lord seems to really love diversity & His amazing creativity is very evident in the natural world!

Apart from this diversity I also wanted to draw the viewers attention to the life cycle of birds & fish. In the top right hand corner you can see eggs in a nest which represents the beginning of the life cycle of birds. The chick to the left further suggests that development from egg to adult bird. There are brown feathers in the bottom left of the picture, which represent the unique nature of birds, especially there ability to fly.
Interestingly, many fish also come from eggs, in the lower left of the picture, behind the lobster, you can see a green Mermaid’s Purse (aka Devil’s Purse), which is an egg case or capsule surrounding the fertilized eggs of some sharks, skates, and chimaeras.


Bible Doctrine Notes
1:22,28 SALVATION, Blessing (4.26A)
God’s salvation is His blessing. God blessed sea and air creatures, the man and the woman, all of whom He had created. His word/command for them all was to be fruitful and multiply. In addition the man and woman were to fill the earth and subdue it. They were given the duties of stewardship over the whole earth and its contents. Saved people are stewards of God’s blessings.