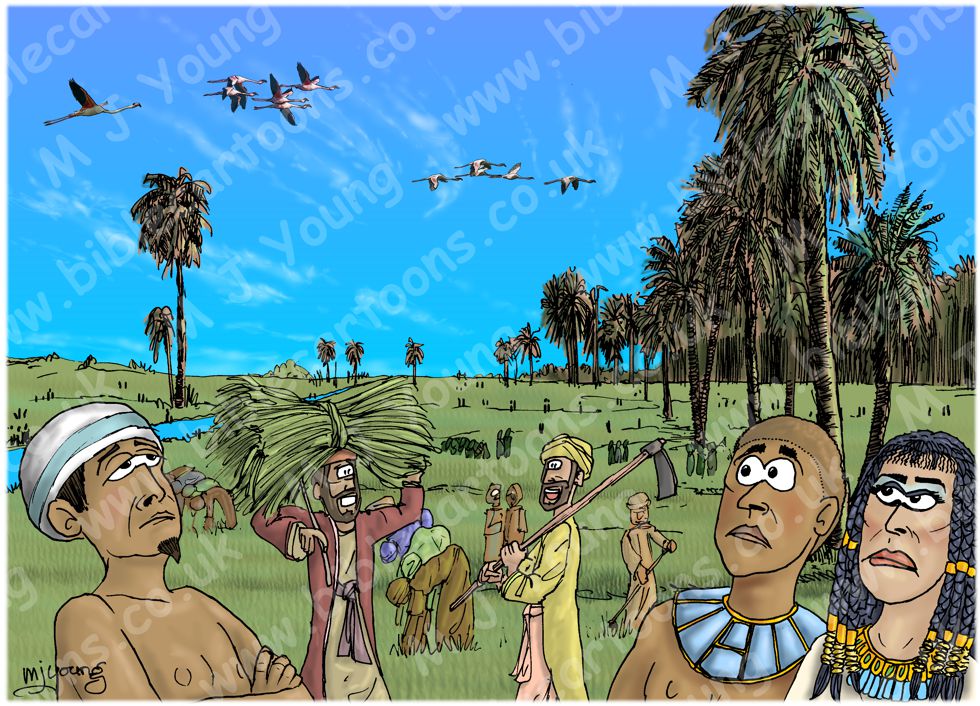 Exodus 1:1-7 (ANIV)
1 These are the names of the sons of Israel who went to Egypt with Jacob, each with his family: 2 Reuben, Simeon, Levi and Judah; 3 Issachar, Zebulun and Benjamin; 4 Dan and Naphtali; Gad and Asher. 5 The descendants of Jacob numbered seventy [1] in all; Joseph was already in Egypt.
6 Now Joseph and all his brothers and all that generation died, 7 but the Israelites were fruitful and multiplied greatly and became exceedingly numerous, so that the land was filled with them.

Genesis 46:27 (ANIV)
27 With the two sons who had been born to Joseph in Egypt, the members of Jacob’s family, which went to Egypt, were seventy in all.

TIME OF DAY:
Unspecified in Bible account. I have set the scene in the mid morning.

LIGHTING NOTES:
Simple sunlight from the right illuminates this scene.

CHARACTERS PRESENT:
Three un-named Egyptian people (in the foreground) looking at the abundant Hebrew people working fields in the land of Goshen, Egypt.

RESEARCH/ADDITIONAL NOTES:
There are two versions of this scene:
01) (This page) Exodus 01 – Hebrews Oppressed – Scene 01 – Fruitful & numerous (Version 01). This is the original version, with bare chested Egyptian men.

02) (Next page) Exodus 01 – Hebrews Oppressed – Scene 01 – Fruitful & numerous (Version 02). This is the newer, more modest version (specifically requested by a customer) which covers up the bare chested men in the scene.

This is the first scene in this series about the Hebrew oppression that preceded the Exodus out of Egypt. In this picture we can see many Hebrew people working fields in the land of Goshen, Egypt. Although this is the first scene in this series, it isn’t the first one I have designed & completed! One of the great things about Bible Cartoons is that I can produce them in any order I like, and they will still be displayed in order when it comes to showing them on the website! I finished “Exodus 01 – Hebrews oppressed – Scene 03 – Hard labour” in 2014, & have only just completed scene 01 – Fruitful & numerous in July 2016.


Bible Doctrine Notes
1:1-7 HISTORY, Promise (3.33B)
Biblical history is more than a list of renown people or heroes. Genealogies and family trees show the scope of the people of God continuing from one generation to the next. The Bible shows how God formed for Himself a nation of people amidst the normal circumstances of life: famine, migration, the passing of generations, etc.

1:7-21 ELECTION, God’s Promise (4.11C)
God had promised Abraham, Isaac, Jacob and Joseph that their offspring would flourish and multiply. Despite the tyrannical plans and methods of Pharaoh, the Israelites multiplied, according to God’s promise.